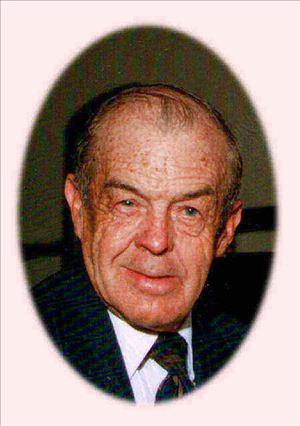 Bud was born in Stockholm Township of Wright County, Minnesota on July 20, 1929, to William and Lilly (Lindberg) Nyquist. Shortly after his birth, Bud moved with his family to a farm near Cloverland, Wisconsin. After he completed his schooling, he moved to Hoffman in 1947, where he continued farming with his father. On June 4, 1960, Bud was united in marriage to Sylvia Anderson at the Ben Wade Covenant Church in rural Lowry. The couple continued farming and raised their three sons. In the mid-1970's, Bud and Sylvia decided to sell their cattle and rent out their land. Bud then worked at odd jobs for several years until his retirement. Bud loved his family, his church and his Lord, never wanting to miss a church service. He enjoyed watching sporting events, especially the Vikings and Twins. He served in several different capacities in the Ben Wade (Lowry Community) Covenant Church. He will be missed for his sense of humor and his quick wit. Bud is survived by his wife Sylvia of Alexandria; sons Steve (Cindy) of Zimmerman, Gary of Fridley, and Jeff (Roberta) of Nisswa; a brother Dean (Marie) Nyquist of New Hope; five grandchildren: Elizabeth (Dan) Lindskoog, Victoria (Dave) Carlson, Andrew Nyquist, Anna Nyquist, and Emily Nyquist; and several nieces and nephews. He was preceded in death by his parents, and two brothers, Grant and Jim Nyquist.

Visitation resumes at the church one hour prior to the service.

To order memorial trees or send flowers to the family in memory of William Nyquist, please visit our flower store.