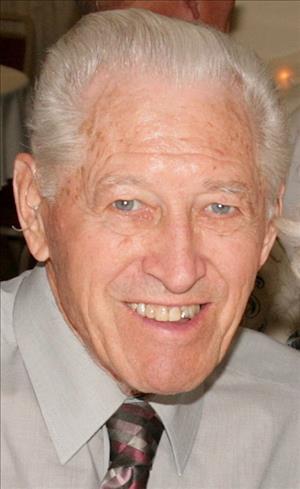 Wayne Schneeberger, 82, of Elbow Lake, died Wednesday, August 13, 2014 at Sylvan Crossings in Fitchburg, Wisconsin. Wayne Orton Schneeberger was born May 14, 1932 on a farm in Sanford Township in Grant County to Walter and Opal (Olson) Schneeberger. Wayne was the only student in his class for the first eight years of country school and graduated from Elbow Lake High School in 1950. He remembered his classmates and never missed a reunion. Wayne served his country during the Korean War, crossed the ocean to Yokohama, Japan and immediately was sent to Korea and the front lines. After the truce was signed in July, he was reassigned to battalion communications as a switchboard operator. He spent the last six months of his service in Korea playing in the Division Band after which he was honorably discharged. He returned to Elbow Lake where he drove school bus for 33 years and started farming with his father. His farming continued until retirement. Another 'work enjoyment' was Wayne's bowling activity. Not only did he work many hours on the lanes, he was an avid bowler with dozens of trophies to attest to his talent. He served on many boards including the Elbow Lake Grain Board for 12 years and the Grant County ASC for many years. His community involvement included the Senior Citizen Organization, which he served as President for several years and was especially involved with the serving of breakfasts for years during Flekkefest, the Centennial Committee and other annual Flekkefest celebrations. He was active in his Church on various levels: choir member, Council President, Treasurer, and Elder. He was a charter member of the Grant County Barbershop Chorus and sang in a quartet with his cousins for many years. For his many contributions to the community, he was nominated "Male Outstanding Citizen of Grant County" in 2007. When Whoopee John played in the area, Wayne was there, having no problem finding willing partners, because he was a great dancer. Jimmy Jensen was another favorite and the two of them became good friends over the years. Wayne became very active in the American Legion and was a lifetime member, celebrating 61 years of continuous membership. He served the Post in various positions: Commander, Post County Commander for two terms, membership chairman for many years and Adjutant for nearly 25 years, during which time the Legion built the Veterans' Memorial Hall addition to the Grant County Museum. He was a lifetime member of the Veterans of Foreign Wars. Wayne is survived by his wife, Doris Koster of Madison, Wisconsin, who he married in 2003. Traveling with Doris was a special joy and he was thrilled to say that he had walked on the Great Wall of China and he learned to enjoy cruising, which was Doris's favorite way of traveling. He is also survived by the children of his first marriage to Sharon Peterson: Steven (Gina) of Richfield, Annette (Brian) Larson of Seattle, and Joel (Kirsten) of West Fargo; three grandchildren, Ava, Lillian and Nathaneal, 2 step-granddaughters, Mariele and Erica Larson; sister, Carolyn (Rodney) Horst of Wendell; brother, Allan (Carla) of Elbow Lake and many nieces and nephews; and by Doris's family and her grandson, Joshua. Memorials preferred to Christ Lutheran Church, the Grant County Veterans Memorial, or an organization of the donors choice. Visitation: 5 – 7 PM Thursday, at Erickson-Smith Funeral Home in Elbow Lake, and resuming one hour prior to services at the church. Funeral Service: 11 AM Friday, August 22, 2014, at Christ Lutheran Church in Elbow Lake Clergy: Pastor Donald Wagner Interment: Zion Evangelical Cemetery, Barrett Condolences: EricksonSmithFH.com

One hour prior to the service at the church.

To order memorial trees or send flowers to the family in memory of Wayne Schneeberger, please visit our flower store.