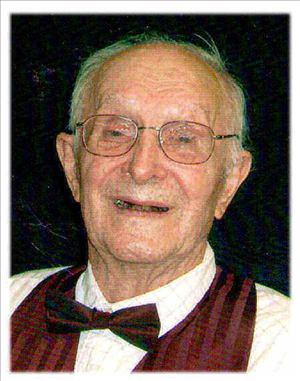 Walter Roske, 97, Hoffman, died peacefully on Friday, September 27, 2013, at the Good Samaritan Society-Hoffman. Walter Elmer Roske was born on June 20, 1916, on the family farm near Barrett, Minnesota, the son of Carl and Martha (Schwartz) Roske. He was baptized and confirmed in the Peace Lutheran Church in Barrett, attended country school by Barrett through the eighth grade, then began farming. Walter met Greta Kruize at a house party hosted by his Grandmother Schwartz. The couple married three years later on September 25, 1940, and spent 72 wonderful years together. Walter and Greta were active members of Zion Lutheran Church of Hoffman. Sundays were held sacred, first for worship, then for gathering together with family or friends for home cooked meals, conversation, and a few rounds of Whist or Yahtzee. Walter and Greta owned their family farm until the early 1970's when they retired from farming because of Walter's heart disease; they then moved into Hoffman. While Greta was working and after her retirement, they were able to spend their days traveling in their camper or taking bus tours throughout the United States and parts of Canada and Mexico, including a memorable anniversary trip to Niagara Falls. Walter and Greta were very proud that they had visited 44 of the lower 48 states together. Walter eagerly joined in on any card game, board game, or yard game that was part of the day's activities; he also spent many hours playing solitaire and completing jigsaw puzzles. His smile was biggest and he was happiest when he was spending time with his grandchildren and great-grandchildren. Walter and Greta enjoyed spending time on the water, especially fishing. Walter was an excellent shot and looked forward to hunting ducks, pheasants and deer. He was a great conversationalist and enjoyed visiting with anyone and everyone. He created nicknames for his family members and was a great teaser. Walter was also very mechanical; he handled his own repairs from basic maintenance to welding to major overhauls. He simply enjoyed life.

Resumes at church one hour prior to service

To order memorial trees or send flowers to the family in memory of Walter Roske, please visit our flower store.