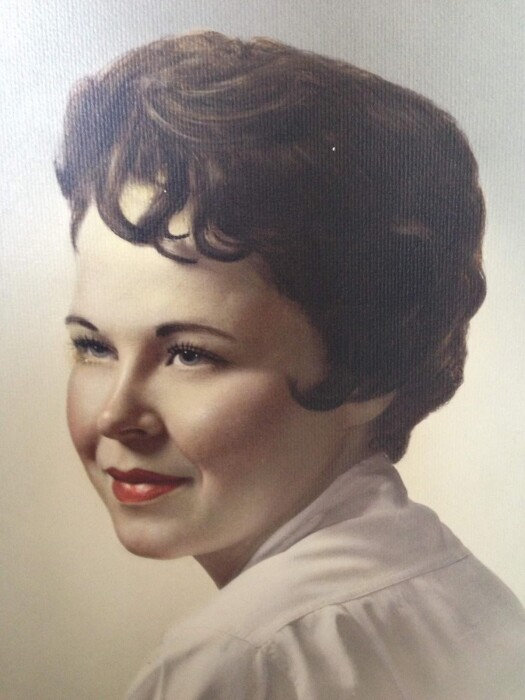 Valerie Nadine (Block) Johnson, 84, from Barrett, MN, passed away at her home in Arlington, VA on Saturday, November 20, 2021. She was born on September 9, 1937 in Barrett, MN to Judith Berglioth (Leraas) Block and Hugh Edward Block. Valerie was baptized, confirmed, and married at Immanuel Lutheran (“Lien”) Church in Barrett.

Valerie grew up on a farm in Grant County with her parents, older brother Lynford Monroe, twin sister, Vyonne Neline, and younger sister, Verlie Ann. She had many fond memories of field working with her dad driving tractors, and not-so-fond memories of being pecked by chickens in the coop. She loved roller skating on Thursday nights at the Barrett Pavilion, and could always be seen wearing matching outfits with her twin, Vyonne. Trips into town included Saturday morning weekly piano lessons in Barrett, and Christmas shopping in Fergus Falls. Christmas time every year meant that each sibling got their own bag of chocolate chips and bottle of ketchup.

Valerie graduated from Barrett High School in 1955. While she moved on to the city to attend secretarial school, she always thought of herself as a girl from the country. Valerie attended Interstate Business College (Fargo, North Dakota), and worked in Brainerd for Sother’s Photography Studio, hand painting black and white portraits.

Valerie met Richard James Johnson in Fargo while he was attending North Dakota Agricultural College (later North Dakota State University), and they were married on June 9, 1959. In their early wed years, they moved to San Francisco, California and White Sands, New Mexico, following Richard’s job in the United States Army.

In 1960, they made their home in Arlington, Virginia, where Richard worked for the United States Patent and Trademark Office, and Valerie devoted herself to raising their three children, Mark Richard, David Michael, and Susan Fay. Valerie later worked as an Air Force defense contractor, with occasional part-time jobs as a typist for book authors and newspaper editors, and as a senior companion.

Valerie cherished spending time with her family above all else. She made frequent trips back to Minnesota to see her family and friends.  She enjoyed teaching many family members how to make lefse, as well as how to knit, sew and embroider. She also taught family and friends how to play the fast-paced card game, Muggins, and was quick to call “Muggins!” on someone who took too long on their turn. She was helpful and kind to anyone who needed assistance with a project, and her unending patience and persistence were her greatest assets.

Visitation will be held at the Peace Lutheran Church, 218 Church St., Barrett, MN on Saturday, December 4, 2021 beginning at 12:30 pm, followed by a service at 2:00 pm. Interment will be at Immanuel Lutheran Cemetery, Lien Township, Barrett, MN 56311.

To order memorial trees or send flowers to the family in memory of Valerie Johnson, please visit our flower store.