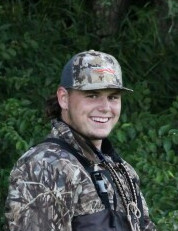 Tyler David Larson Stone was born on July 25, 2004, at Lake Region Healthcare in Fergus Falls, to David Johnathon and Kelsey Lynne. He was baptized and confirmed at the First Presbyterian Church in Ashby, MN. Tyler attended elementary school in Breckenridge, before moving and attending West Central Area Secondary School in Barrett. He participated in Football, Wrestling, Track & Field and elementary baseball. He had future plans of being a collegiate athlete and study in an Ag related field. Tyler was also accomplished in horseshoes, where he won many awards and was the 2017 Junior Pitch Champion.

Tyler was very proud of his work and currently worked at Starner Farms and DHS Grain Systems. Tyler enjoyed farming, building campfires, 4 wheeling, going to the Black Hills, sports, dirt track racing, adventure and anything outdoors. He could often be seen doing what he loved, hunting ducks and geese, deer, pheasant and the occasional pigeon. Recently he took up golfing which he enjoyed with his special friend, Lexi Hunter. Family was very important to Tyler and he shared a special bond with Grandpa and Grandma Larson. He was a hard worker, helpful, humble, kind and had a big heart. He could be seen as having a tough exterior and a sweet inside. Tyler was not shy and enjoyed being around his family and many friends. He was a gym rat who spent time lifting weights, hanging with his friends, and supporting his siblings in all their activities. He enjoyed watching the sunrise, and sunset. Tyler will be missed by all who knew him, and made a lasting impression on all who called him family and friend. God bless the memory of Tyler David Larson Stone.

The family encourages any athletes to wear their respective team jerseys, and welcomes anyone local with a tractor to drive it to the service. In lieu of flowers memorials preferred to the Tyler Stone Memorial Fund at the Viking Bank, PO Box 10, Ashby, MN 56309.

Funeral arrangements are with the Erickson-Smith Funeral Home of Elbow Lake-Hoffman.

To order memorial trees or send flowers to the family in memory of Tyler Stone, please visit our flower store.