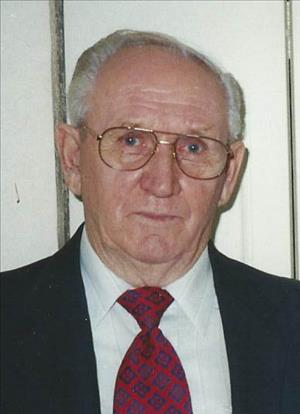 Thomas Johnson, 94, of Barrett, MN, died on Saturday, February 28, 2015, at the Johnson Group Home in Barrett, under the care of Lakeland Hospice. Thomas was born on December 14, 1920 in Erdahl Township to John & Betsy (Hellickson) Johnson. He grew up and attended country school in rural Dalton, MN. On September 30, 1942, he enlisted in the United States Navy where he served on a Supply Ship during WWII. He was stationed in many parts of Europe including France and the Philippians. Thomas was honorably discharged on October 1, 1945. On November 4, 1942, he married Lois Muriel Brown in Moorhead, MN. The couple finally settled in the Dalton area where Thomas farmed. The couple moved to Elbow Lake in 1995. His hobbies included hunting and trapping. He was preceded in death by his parents, John and Betsy; his wife, Lois Johnson, nine siblings; and a son, Robert Johnson. He is survived by a daughter, Shirley Klein of Monticello, MN; a grandchild, Stacey Voigt of Monticello and two, great grandchildren, Brook and Matt Voigt. Memorial Service: 1:00 P.M., Saturday, April 11, 2015, at the Erickson-Smith Funeral Home in Elbow Lake. Funeral arrangements are with the Erickson-Smith Funeral Home of Elbow Lake.

To order memorial trees or send flowers to the family in memory of Thomas Johnson, please visit our flower store.