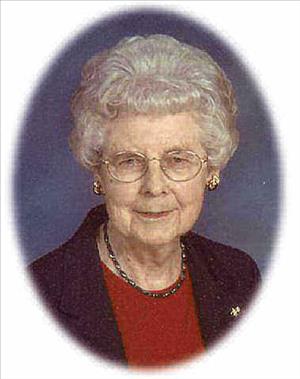 Thelma Dahl, age 90, Alexandria (formerly Elbow Lake), died Tuesday, February 28, 2012, at Knute Nelson Home, Alexandria. Funeral services for Thelma Dahl will be held at 11:00 am Monday, March 5, 2012, at United Lutheran Church in Elbow Lake with the Rev. Bob Toso officiating. Burial will be in Ness Cemetery, Elbow Lake. Visitation is Sunday, March 4, 3:30 to 5:30 pm, followed by a prayer service; visitation will resume at the church on Monday one hour prior to the service. Thelma was born on August 18, 1921, in a prairie home near Enchant, Alberta. She lived there with her parents, Theodore and Nellie (Iverson) Engen and her older brother Melvin until she was three years old. By that time, a prolonged and severe Alberta drought had taken its toll on the family and they returned to Minnesota in hopes of a fresh start. Thelma attended several rural schools in the Elbow Lake area and, much to her regret, did not have the opportunity to continue beyond the eighth grade. She loved school and couldn't understand why anyone would complain about the opportunity to learn. Thelma attended confirmation classes under the instruction of the Rev. O.G. Aasen and was confirmed on May 26, 1935. In October of 1942, Thelma was united in marriage to Donald O. Dahl. The ceremony took place at Ness Lutheran Church in Elbow Lake when Donald was home on a brief military furlough from his duties as a sergeant in the United States Army Air Corps. When the war ended and Donald was discharged, Don and Thelma entered into farming by first renting and then buying a farm. For 30 years, they made their home on the farm two miles southwest of Elbow Lake. Thelma was a working partner in most every aspect of farm life, but she especially made her mark by way of her sewing, gardening, baking and cooking skills. She had grown up under the theme of "use it up, wear it out, make it do."

In addition to her skills on the farm and in the house, Thelma found time to serve in the community by way of her work at church with Sunday School, Release Time classes, Dorcas, Stephen Ministry, LDR and ULCW. She was proud to be a member of United Lutheran Church and spent countless hours there helping carry out the great commission given by her Lord Jesus Christ.

Thelma loved her family and enjoyed the broad company of people she came to know through her many connections. She was a great wife, mother, grandmother and neighbor. In every setting that came to her, she made friends and made a positive difference. She played a good game of Scrabble and performed well above her formal eighth grade spelling lessons. Family members who grieve the loss but celebrate her life include her five children: Kathleen (Craig) Damstrom of Alexandria, Robert (Lois) Dahl of Marshall, Beverly (Larry) Bowers of Montevideo, Charlotte (Wayne) Lehne of Appleton, and Dawn (David) Cooper of Alexandria; twelve grandchildren and eighteen great-grandchildren: Brenda (Timothy) Dahle and children Amanda, Zachary, Alyssa, Nicholas; Shana (Hans) Zahrbock and children Sadie and Simon; Scott (Amy) Damstrom and children Anderson and Pressly; Teisha (Paul) Hohn and children Luke and Ella; Kristi (Travis) Bruyer and children Tucker and Zoey; Lynn (Craig) Helgeson and children Kendra and Kaden; Jonathan (Sarah) Dahl and children Sawyer and Annika; Christopher Lehne; Andrew Lehne and children Charlie and Jacob; Justin Damstrom; Matthew (Kathryn) Cooper; Charles Cooper; sister-in-law Doris Hagenson; and nieces Diane, Cheryl and Julie. Thelma was preceded in death by her husband Donald, parents Theodore and Nellie Engen, and brothers Vernon and Melvin Engen. Blessings on the memory of Thelma!

To order memorial trees or send flowers to the family in memory of Thelma Dahl, please visit our flower store.