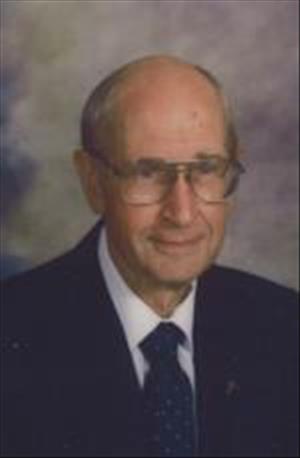 He farmed with his father until entering the military in 1944. He served in the US Army in the Pacific Theatre. After the war, he returned to Minnesota, and on April 9, 1949, married Shirley Amundson at the First Lutheran Church in Elbow Lake.

Sid worked as a photo-lithographer in Minneapolis until 1951. Then he and Shirley returned to Elbow Lake where he entered into the farm implement business with his cousin Gerald Walwick. Odell Aamot became his partner in 1963. Sid completed his career working for Aamot Implement in Wendell until retiring in1983. Sid was always proud of the red International Harvester products.

Sid was very active in his church and community. He served on the boards of First Lutheran Church, United Lutheran Church, and the American Lutheran District Parish Education Committee. He taught senior high Bible class as well as an adult Bethel Bible Series class. He also served many years on the Ness Cemetery board and spent countless hours serving as the sexton for the cemetery. Sid also served on boards for the Civic and Commerce Association, city and county planning commissions, as well as the Elbow Lake Community Hospital. He was a member of American Legion Post 321.

Sid was an avid reader of theology, biographies, history, and current events. He also was a lifelong reader of the daily newspaper. He always read the funnies first, then the editorial page. He loved yard work and gardening. In addition, he loved his daily walks and always made sure the road ditches were free of litter. In years past, Sid also enjoyed riding bike. He was environmentally conscious long before it became popular. He was very proud of and especially enjoyed the time he was able to spend with his children, grandchildren, and great-grandson. But, his greatest enjoyment in life came from spending time with his "buddy" and best friend Shirley.

Sid was preceded in death by his parents.

Visitation: One hour before service at church on Monday