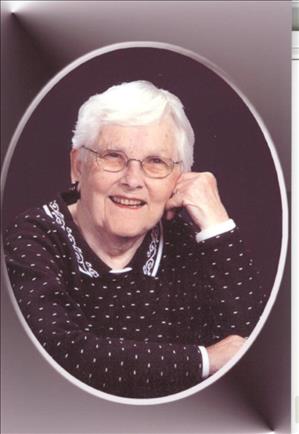 Shirley Smith, 88, of Barrett, died Tuesday, May 17, 2011, at the Prairie Ridge Hospital in Elbow Lake. Funeral: 2:00 pm Saturday, May 21, 2011, United Lutheran Church, Elbow Lake Clergy: Rev. Bob Toso Burial: Union Cemetery, Elbow Lake Visitation: 6-8pm Friday, Erickson-Smith Funeral Home, Elbow Lake; one hour before the service In lieu of flowers, memorials are preferred. She was born April 13, 1923, in Rothsay, Minnesota, to Albert Richard (Dick) and Karen Jo Wilda (Tanberg) Meis. She was baptized in Fergus Falls on May 27, 1923. In 1933, the Meis family moved to Elbow Lake. Shirley was confirmed on June 25, 1937, by the Rev. A. W. Sorenson at St. John's Church in Elbow Lake and graduated from Elbow Lake High School on May 28, 1941. After graduation, Shirley worked with the National Youth Administration in the Superintendent of Schools office in the Grant County Courthouse. On June 5, 1943, Shirley was united in marriage to Larry Albert Smith at her parents' home by the Rev. A. W. Sorenson. Attending the couple were Evalyne and Donald Larson. Shirley continued working. In 1942, she began serving as the assistant clerk in the Grant County Selective Service office in Elbow Lake during World War II and was secretary of War Bond Drives and vice president of the Servicemen's Wives Club. In 1946, they moved to St. Paul, Minnesota, where Shirley was employed by the West Publishing Company and Minnesota Electric Supply Company. The Smith family returned to Elbow Lake in 1948. Shirley was a wonderful homemaker for her husband and children. Shirley moved to an apartment at the Barrett Assisted Living Community in March 2003. Through the years, Shirley was involved in 4-H, an active member of St. John's and United Lutheran Church, church circles, ULCW and the Tribes. She was an active member of the Elbow Lake Study Club since 1951, serving as president and secretary over the years. She was a lifetime member of the Grant County Hospital Auxiliary and a lifetime member of the Grant County Historical Society. Shirley's early years began with making scrap books and photo albums for her family. She loved playing whist and bridge and enjoyed traveling, golfing, dancing, bowling, reading, baking, bingo, and visiting with friends. She loved spending time with her family, grandchildren and great-grandchildren. Shirley loved catching fish in Warroad and dressing up for the holidays. Always smiling, Shirley's positive attitude was reflected in her daily living. She enjoyed the staff and many friends she made during her eight years in Assisted Living. As one who was very organized, Shirley remembered special occasions and loved sending cards to people. Shirley is survived by her children Teresa (Elliot) Larson of Warroad, Pamela (Bill) Ford of Phoenix, AZ, and Rebecca Smith of Alexandria; five grandchildren, Brock (Heidi) Christianson of Arden Hills, Bryan (Melissa) Christianson of West Concord, Kristen (Matt) Guse of Waconia, Kari (Chris) Sprenger of Warroad, and Tony (Nicole) Ford of Concord, CA; 11 great-grandchildren, Jack, Ty and Maren Christianson, Myles and Graham Christianson, Aaron and Rachel Guse, JoyDell and Ruthann Sprenger, and Sawyer and Braeden Ford. She was preceded in death by her parents Dick and Wilda Meis, a sister Virginia and a brother Russell, who died in childhood, brother Lowell Meis, sister-in-law Viola Meis, daughter Vicky Christianson (1994), and her husband Larry (2000). Shirley will be deeply missed by her family and friends.

Visitation will resume at the church on Saturday one hour before the service.

To order memorial trees or send flowers to the family in memory of Shirley Smith, please visit our flower store.