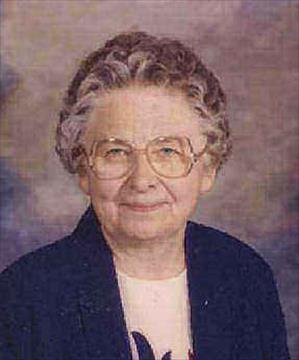 Shirley Ellingson, 84, formerly of Elbow Lake, died Thursday, September 20, 2012, at the Barrett Care Center. A memorial service for Shirley Ellingson will be held at 1:30 pm on Monday, September 24, 2012, at United Lutheran Church in Elbow Lake with the Rev. Bob Toso officiating. Visitation will be one hour prior to the service at church. Burial will be in Ness Cemetery, Elbow Lake. Shirley was born December 6, 1927, in Ashby, Minnesota, to Alfred and Sophie (Ferguson) Amundson. She was baptized at home and confirmed at Ness Lutheran Church in Elbow Lake, where she grew up and graduated from high school in 1945. She was employed by the Bank of Elbow Lake from June 1945 until March 1949. On April 9, 1949, she married Sidney Ellingson at the First Lutheran Church of Elbow Lake. They resided in Minneapolis from 1949 until 1951, at which time they returned to Elbow Lake. Shirley was the bookkeeper for Aamot & Ellingson Implement from 1963-1976 and a part-time bookkeeper for Aamot Implement in Wendell from 1976-1986. She retired in 1986. Shirley was active in the ULCW and a long-time circle member. She also was a dedicated quilter for the Dorcas Society, sewing many, many quilt blocks to assist them in their quilting endeavors. Shirley loved to read. She read everything from Stephen King to Robert Ludlum to Sue Grafton. She also enjoyed historical novels. She loved sports, especially the Twins, the Gophers and just about any women's sports (except for hockey, she said she just didn't understand hockey). In recent years, she was disappointed the local cable offerings did not include the Big Ten Network. She would have been an outstanding athlete if ever afforded the opportunity. Shirley also loved doing the crossword puzzles in the daily newspapers. Before moving out of the family house, she was an avid flower gardener and enjoyed walking with her neighborhood friends. She loved when her children and grandchildren would visit, always having a Saturday lunch of barbecues ready. She loved spending time with her grandchildren and was thrilled to meet her two great-grandsons. Shirley was humble and unassuming in demeanor. She faced the difficulties and complications resulting from congestive heart failure without complaining and a quiet acceptance that we will never forget. Shirley is survived by her children: daughter Karen of West St. Paul and son Bruce (Joyce) of Minneapolis; four grandchildren: Kjersten (David) Schladetzky of Minneapolis, Kevin Ellingson of Minneapolis, Jesse and Iliana Ellingson-Diaz of West St. Paul and two great-grandsons, William and Nelson Schladetzky. Other survivors include her brother Orvin (Eljene) Amundson and sister Valdeen Gerber, both of Elbow Lake. "Auntie Shirl" is also survived by many nephews and nieces. She was preceded in death by her parents Alfred and Sophie; husband Sidney; four brothers, Winfred, Milton, Orlin and one in infancy, and two sisters, Hazel Clemenson and Doris Burgess.

To order memorial trees or send flowers to the family in memory of Shirley Ellingson, please visit our flower store.