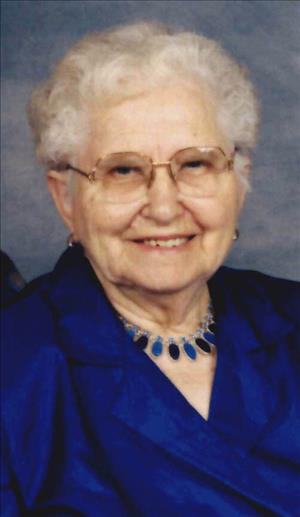 Selma Antonia Thompson Harstad Bruse, was born on February 10, 1919, the daughter of Ole & Olivia Thompson and was one of 12 children. Selma grew up in Grant County on a farm near Herman. She graduated the 8th grade in 1933. Selma worked on the family farm until 1940 when she met Arthur Harstad. They were united in marriage in June of 1940. From this marriage Selma and Art had two boys; Palmer Theadore Harstad born February 6, 1942, and Stanley Arthur Harstad, March 5, 1944. Selma and Art farmed by Herman. Due to Art's health they moved to Donnelly. Arthur Harstad died May 6, 1960. Selma then married EH (Hubert) Bruse on December 22, 1961. They were married 43 years until Hubert passed away, May 6, 2004. Selma worked many jobs in her lifetime. She was a housekeeper, worked at the Donnelly Creamery, the Herman Locker Plant, Ray Wright's grocery store and helped out at the Norcross Café. Selma had many interests, working at the EAA Oshkosh Fly-in for 25 years along with Hubert, American Legion Auxiliary for 19 years and Norcross Senior Citizens. Hubert and Selma were even Senior Citizens of the year. Selma loved helping make rugs for the Norcross Methodist Church. One of her favorite pass times was making quilts for family members, each different and beautiful in its own right, and all were bright and happy just like she was. She also made lap quilts for the Veterans Hospital in Fargo, ND, and loved playing round robin whist, card games and dominoes with her great-grandchildren. Selma is survived by her son, Stanley (Konnie) Harstad of Herman; two grandchildren, Heidi (Brian) Rogers of Brooklyn Park, MN and Jason (Tracy) Harstad of Brooklyn Center, MN; 5 great-grandchildren, Amanda, Samantha (Jason Harstad), Nicole, Parker, Paige (Heidi Rogers) and two great-great-grandchildren, Ashlyn & Andrew Nourse along with many nieces, nephews and their families. Selma was preceded in death by both husbands, Art Harstad and E.H. Hubert Bruse; son, Palmer Harstad, and all of her sisters and brothers except Elenora (Mrs. Lester Bevins) of West St. Paul, the youngest of her siblings. Selma Bruse, 95, passed away June 24, 2014 at the Stephens' Homes Plus in Rural Barrett. Funeral Services will be Saturday June 28th at 2pm at the Herman Methodist Church, with a one hour visitation prior to the service. Interment will be at Kongsvinger Lutheran Cemetery of rural Donnelly.

Visitation one hour prior to the service

To order memorial trees or send flowers to the family in memory of Selma Bruse, please visit our flower store.