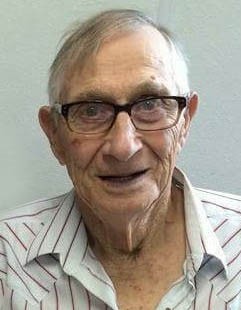 Royal Raymond Lawson was born to Victor and Laura (Brown) Lawson in Wadena, Minnesota on August 8, 1926. Royal’s family lived in Wadena until he reached the age of two when they moved to Steven’s County, and in 1942 they moved to rural Hoffman. On April 30, 1952, Royal married Caroline (Steger) Lawson at St. Charles Catholic Church, Herman. They were blessed with three children, one boy, and two girls.

Royal was a farmer where he took pride in his milking cows, and planting and harvesting his crops. He worked part time for the Soo Line Rail Road, and also did carpentry work. His favorite pastime was mowing the grass; and his favorite meal was a plate full of fried walleye. He cherished his time spent with family, especially his grandchildren and great-grandchildren.

Memorial Mass: 11:00 AM March 24, 2018 at Our Lady of the Runestone Catholic Church, Kensington, with visitation one hour prior to the service.

To order memorial trees or send flowers to the family in memory of Royal Lawson, please visit our flower store.