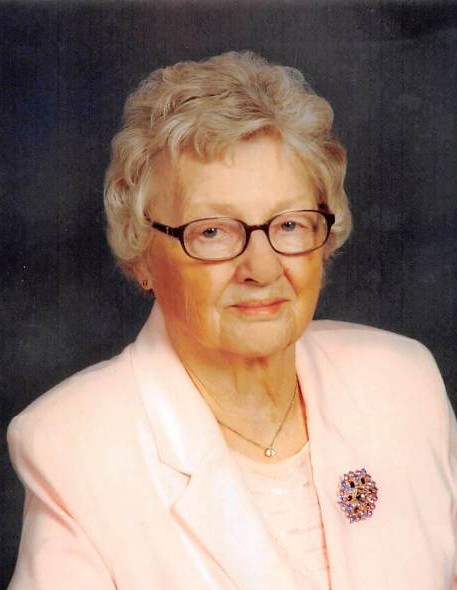 Rose Marie Virginia (Anderson) Hanson, born in rural Hoffman on May 24, 1926, to Herman and Elfei (Nelson) Anderson.  She was baptized on July 25, 1926 at Wennersborg Lutheran Church and confirmed May 12, 1940, at Solem Lutheran Church.  Rose Marie attended school at Hoffman and graduated in 1945.  She enrolled in the Teachers Training program in Glenwood, MN and taught in a rural school in Grant County.

On June 10, 1948, Rose Marie was united in marriage to Louis Hanson at Solem Lutheran Church. They lived and farmed on the Hanson homeplace for 39 years, then moved into Hoffman.   She was a member of Bethel Lutheran church, now called Messiah Lutheran Church.  Rose Marie was active in ELCW. She enjoyed Bible Study and Women’s workdays and quilting.  She was an adult 4-H leader of the Happy Landers.

Family was very important to Rose Marie and she faithfully attended all their activities including those of her children, grandchildren, and great-grandchildren.  She enjoyed gardening, sewing, canning, and cooking up awesome meals and goodies for her family.  She had a true servant’s heart to all of those that knew her.

In Lieu of flowers, memorials are preferred to Wennersborg Cemetery of rural Kensington, or Messiah Lutheran Church, Hoffman MN, for children to be able to attend Luther Crest Bible Camp.

Visitation: 5:00-7:00 PM Sunday, November 4th, 2018, at Messiah Lutheran Church, Hoffman MN with a prayer service at 6:30 PM.  Visitation will resume one hour prior to the service at the Church.

To order memorial trees or send flowers to the family in memory of Rose Marie Hanson, please visit our flower store.