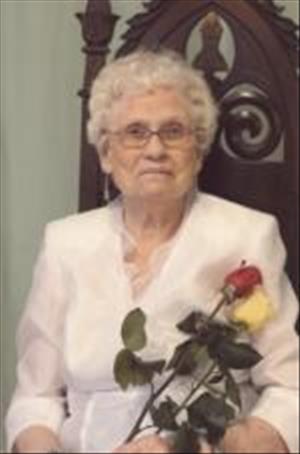 Rose was born December 18, 1921, to Anton and Selma (Alvstad) Ronhovde in Barrett, Minnesota. She was baptized and confirmed at Immanuel Lutheran Church, Lien Township. In 1938 she graduated from Barrett High School and worked at the Grant County Courthouse for a few years following graduation. She married Hugo Parson on March 25th, 1944. Their twin daughters Jean and Judy were born in August 1945.

Rose and Hugo lived on a farm south west of Elbow Lake until their retirement when they moved to a home in Elbow Lake. She was a member of the First Presbyterian Church in Elbow Lake and very active in U.P.W. and taught Sunday school. Rose enjoyed 52 years as an Eastern Star member and was a Past Matron. Being involved in community organizations was important to Rose and she was an active member and provided leadership for Study Club, West Central Regional Arts Council and Hospital Auxiliary. Rose and Hugo co-chaired the 1987 Elbow Lake Centennial celebration. In 2004 she moved from her Elbow Lake home to Barrett Assisted Living and in 2006 became a resident of Good Samaritan Society, Hoffman.

She was preceded in death by her husband Hugo, her parents, sister June, brother Merton, brothers-in-law Jack and Palmer and grandson-in-law Mike Brown.

Rose's family requests that memorials be given to the charity of your choice.