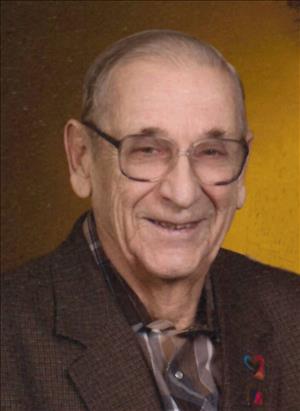 Rodney Royce Koser, 84, rural Elbow Lake, died Wednesday, February 19, 2014, at the Abbott Northwestern Hospital in Minneapolis. He was born on October 1, 1929, in Land Township near Hoffman, Minnesota, to Chester and Clara (Haack) Koser. At a young age, Rodney moved with his family to the farm in Delaware Township where he currently lived. He attended school in Herman, graduating in 1946 at age 16, and began farming with his brother, eventually taking over on his own. On February 4, 1956, Rodney was united in marriage to Joan Gease at St. John's Lutheran Church in Garfield. Together they operated a large farrow to finish hog operation. Rodney and Joan were active in square dancing and attended dances all around the area. They also enjoyed camping. In 1973, Rodney established and developed the trailer park in Garfield, which is still there today. In the 1980's Rodney designed and manufactured farrowing buildings that were marketed in three states. An avid pilot, he was instrumental in getting the airport built in Herman. He was also an avid hunter, going on many hunting trips for elk, bear and alligator. He hunted and trapped on the Mustinka River for many years, which yielded him untold numbers of mink and muskrat. A cardiac arrest survivor for 21 years, Rodney was one of the founding fathers of the National Center for Early Defibrillation in Washington, DC, and also one of the founders of the Minnesota Sudden Cardiac Arrest Association. Rodney was actively involved with show horses along with his daughter and building a race car with his son. Rodney was still active all the way through the 2013 harvest. He played accordion and sang every week for many years at area nursing homes, for birthdays, funerals, and other special occasions. He is survived by his wife Joan Koser of rural Elbow Lake; his son Darren (Russann) Koser of Herman and his daughter Jennifer (Jim) Klang of Kalamazoo, Michigan; five grandchildren, Blake, Connor and Callie Koser, all of Morris, and Aaron and Grace Klang of Kalamazoo. Other survivors include his sisters Iva Jean Tegtmier of West Fargo and Vonna Jane (Ben) DeLong of Alexandria; and one sister-in-law, Mabel Koser of Stephen. Those preceding Rodney in death include his parents; two brothers, Delbert and Dutch; three sisters and their husbands, Virginia Ogg (Paul), Sylvia Jergenson (Lloyd), and Marguerite Koser. Funeral: 11:00 am Monday, February 24, 2014, Bethel Lutheran Church, Herman Clergy: Rev. Lloyd Heroff Visitation: 4-6 pm Sunday, Feb. 23, Bethel Lutheran Church, Herman; one hour prior to service Burial: Lakeside Cemetery, Herman (Spring 2014)

Visitation resumes one hour prior to service at church.

To order memorial trees or send flowers to the family in memory of Rodney Koser, please visit our flower store.