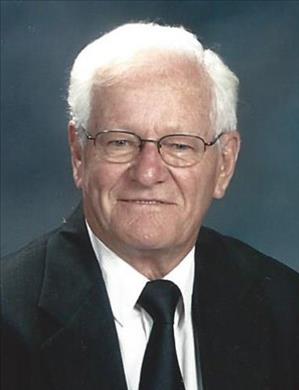 Rodney Christianson, age 85 of Elbow Lake, passed away Monday, January 04, 2016 at the Barrett Care Center. Rodney Christianson was born to Ralph and Helen (Beck) Christianson on February 24, 1930 in Elbow Lake. He was baptized, confirmed and attended rural Country School in Elbow Lake. Rodney attended Morris Ag for two years where he majored in Agriculture. On March 4, 1951, he was united in marriage to Patricia Ann Munson at the Ness Lutheran Church in Elbow Lake. Shortly after their marriage, Rodney was drafted into the Army. He and Pat moved to Fort Worth Texas, where he was stationed for 16 months. The family moved back to Elbow Lake while Rodney finished his service in Frankfurt, Germany. After he was honorably discharged, Rodney attended The Wahpeton School of Science for auto body repair. Rodney spent most of his years farming, while he also owned and operated M& R Snowmobile Sales and Service in the winter. He was very active in the Elbow Lake Snowmobile Club and was a member of United Lutheran Church of Elbow Lake. His hobbies included four wheeling, snowmobiling, fishing and traveling. He enjoyed spending time socializing with family and friends and was known to be quite the jokester. After he lost the love of his life, Pat, he was blessed to find someone that captured his heart to spend the remainder of his life, Elly Brewster. Rodney was preceded in death by his parents, Ralph and Helen; wife, Patricia; a sister, Joycelyn Dickey; and grandson, Jaron Olson. He is survived by his six daughters, Gail (Steve) Dyrstad, Omaha, Victoria (Don) Olson, Perham, Barbara Christianson, Omaha, Debra (Kevin) Champ, Omaha, Karen (Jeff Guttormson) McGee, Elbow Lake and Katherine (Jim) Nowak, Omaha; 15 grandchildren; 29 great-grandchildren; one great-great-grandchild; brother, Ronald (Julie) Christianson, along with numerous family and friends. Visitation: 5PM to 7PM Thursday, January 7 at the Erickson-Smith Funeral Home of Elbow Lake, with a Prayer Service at 6:30PM Funeral: 2PM Friday, January 8, 2015 at United Lutheran Church with Reverend Jean Ohman officiating Interment: Ness Cemetery, Elbow Lake Condolences: EricksonSmithFH.com Erickson-Smith Funeral Home of Elbow Lake is assisting the family with arrangements. There will be a Prayer Service will be at 6:30PM. Visitation will resume one hour prior to the service at the church.

To order memorial trees or send flowers to the family in memory of Rodney Christianson, please visit our flower store.