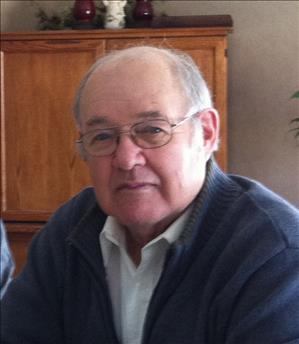 Rodger Anderson, 86 of Hoffman, died Sunday, April 26, 2015 after a 2 day stay at Knute Nelson Care Center in Alexandria, Minnesota under the care of Douglas County Hospice. Rodger Henry Anderson was born at home to Henry and Esther (Johnson) Anderson on April 29, 1928, 6:30am by rural Hoffman, Minnesota. He was baptized on June 24, 1928 and confirmed on May 24, 1942, at Bethel Lutheran Church in Hoffman, and graduated from the Hoffman High School in 1945.

Rodger and Dora Standafer were married on March 9, 1951. To this union four children were born: Janet, Connie, Curt and Alan. Rodger farmed near Hoffman until his retirement when he moved into Hoffman. Following his retirement he was employed several winters with Andes Tower Hills Ski Resort, drove tractor and semi for local farmers, and helped his kids. Rodger always enjoyed staying busy. He loved farming and traveling. He rode thousands of miles taking many trips to all parts of the country traveling with his good "motorcycle buddies". He rode to Sturgis many times. He rode snowmobile during the winter, enjoying various snowmobile trips. Rodger was an avid reader. He also enjoyed playing pool and visiting with friends at the Senior Center the last few years. Dora and Rodger traveled to Hawaii and Mexico. He was a lifelong member of Bethel Lutheran Church, then Messiah Lutheran after the merger. He served on the church board, various committees, operated the sound system, was still in the church choir which he joined in 1942, and through the years had sung for many weddings and funerals. Rodger had a beautiful tenor voice. He sang in a Barbershop Quartet and, with the Elbow Lake Barbershop Choir for many years. Rodger served ten years on the Hoffman School Board, nineteen years on the Hoffman Elevator Board, twenty years on the telephone board, and was involved in various community projects. He is survived by his four children, Janet (Darrel) Holverson, Connie Fields, Curt (Cindy) Anderson and Alan (Becky) Anderson; seven grandchildren, Jason (Leah) Anderson, Kesha Anderson, Aaron (Andrea) Anderson, Jennifer Anderson, Brianna Holverson, Ryan Holverson and Chris Fields; three great-grandchildren, Scarlette and Amelia Anderson and Ryland Trinka; one brother, Elroy Anderson; two sisters, Ann (Jerry) Anderson, and Mavis (Roger) Peterson; nieces, nephews, and numerous relatives and friends. "Family" was very important to Rodger and he was very proud of his children, grandchildren and great-grandchildren. Rodger was preceded in death by his wife of 61 years, Dora, whom he cared for during her last years at home; parents, Henry and Esther Anderson, and sister-in-law, Hazel Anderson.

Visitation will resume one hour prior to the service.

To order memorial trees or send flowers to the family in memory of Rodger Anderson, please visit our flower store.