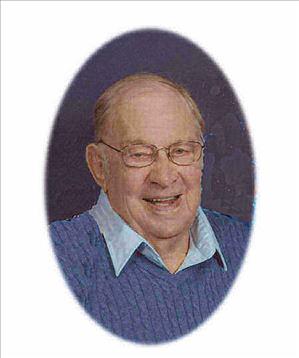 Robert F. Starner, 88, of Hoffman passed away Saturday December 24, 2011, at the Good Samaritan Society-Hoffman surrounded by his family. Funeral: 11:00 am Wednesday, December 28, 2011, at Messiah Lutheran Church, Hoffman Clergy: Rev. Steve Olson Burial: Union Cemetery, Elbow Lake Visitation: 5-7pm Tuesday, Erickson-Smith Funeral Home - Hoffman; one hour before the service at the church on Wednesday Robert Franklin Starner was born February 5, 1923, in Hoffman, Minnesota, to Lee and Pauline (Bonck) Starner. Bob attended school in Hoffman and graduated in 1941. On December 26, 1945, Bob married Ruth Maxine Ness. Bob was a lifelong resident of Hoffman and farming was his entire life, from being raised on a farm to owning and running his own farm to assisting his sons while they continued the family farming tradition. Family was an important part of his life, from playing sports with his sons and daughter and their friends to taking the family out on the pontoon when time permitted. He always took his family to church and served on church committees. His interest in sports continued throughout his life as he was a big fan of the Minnesota Twins. He enjoyed bowling and playing cards. He served on the school board and for a time as president. He also served on the county HUD committee. After retiring from farming he spent time reading Western stories and novels. A few years ago, he and Ruth were voted Grant County senior citizens of the year. Bob is survived by his wife, Ruth of Hoffman; sons Dennis and Joanna Starner of Madison Lake, MN; Bob and LuAnn Starner of Hortonville, WI; David and Cheryl Starner of Hoffman, MN; John and Debra Starner of Hoffman, MN; Mark and Cindy Starner of Hoffman, MN; and daughter Marjorie Starner of Woodbury, MN; nine grandchildren: Lisa, Rachel, Dave Jr., Andy, Joshua, Nicole, Michael, Jennifer and Bryan and seven great grandchildren. He was preceded in death by his parents Lee and Pauline Starner, brother Ralph Starner, son Gerald Starner, grandson Will Starner, and granddaughter Leslie Starner.

One hour prior to the service on Wednesday at the Church

To order memorial trees or send flowers to the family in memory of Robert Starner, please visit our flower store.