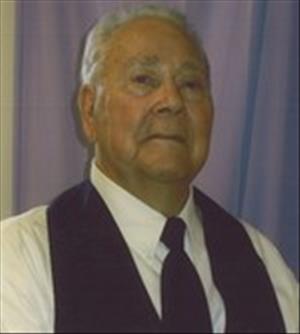 Richard Weiland, 88, of Kensington, died Saturday, Dec. 5, at the Good Samaritan Society of Hoffman. Services for Mr. Weiland will be held at 11am Wednesday, Dec. 9, at Our Lady of the Runestone Catholic Church in Kensington with Fr. Roger Thoennes officiating. Burial will be in the church cemetery. Visitation will be held at the Erickson-Smith Funeral Home in Hoffman from 4-7 pm on Tuesday, with parish prayers at 4:30. Visitation will resume at the church one hour before the service on Wednesday morning.

Richard Anthony Weiland was born in Madison, Nebraska, on March 26, 1921, to Nickolas and Anna (Pusl) Weiland. He served six years in the U. S. Navy as an aviation metalsmith aboard aircraft carriers in the Asiatic-Pacific theatre during WW II. He received the WW II Victory Medal and Presidential Unit Citation. After his discharge, he returned to Madison, Nebraska, where he was employed with the Swanson Funeral Home as an ambulance driver and also assisted at the funeral home for two years. Richard and Norma Pauline Jenson were married in Las Vegas, Nevada They lived in California where he was a machinist for the Anadex Corporation in Canoga Park making parts for jet engines and the space programfor ten years. He went on to work for the Rocket Dyne Corporation and retired in 1986. He enjoyed fishing, reading (especially westerns), bowling, and sports and was a Minnesota Twins and Vikings fan. He and Norma also enjoyed traveling. Survivors include his wife Norma of Kensington; daughters Pauline DeSmith of St. Paul, Phyllis Jackelen of New Richmond, Wisconsin, Theresa Moore of Bull Head, Arizona, and Barbara Simmon of Baldwin, Wisconsin; five grandchildren, Christopher (Dana) DeSmith, Bridgette Jackelen, Tamarah Jackelen, Troy Simmons, and Anthony (Shelly) Moore, and five great-grandchildren, Kamren and Brenden DeSmith, Loren Simmon, and Shasta and Alyssa Moore; sisters Betty (Kenny) Hedstrom and Monica Norman, both of Hoffman, and brothers Nic Weiland of Hoffman and Robert (Carolyn) Weiland of Alexandria. He was preceded in death by his parents; grandson Trent Simmon; and siblings Victor, Jerome, Eileen Anderson, Ronnie, Judy Jenson, LeRoy, Majorie Jenson, and Donald.
To order memorial trees or send flowers to the family in memory of Richard Weiland, please visit our flower store.