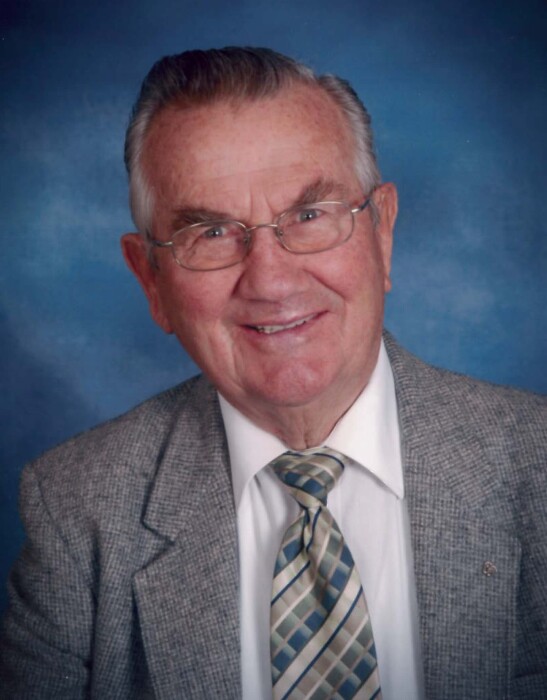 Richard was born on September 9, 1928 to Jules and Julianne (DeBaere) Jennen.  He was born in Duluth, MN where his mother spent the fall of each year to avoid severe allergies to the farm dust.

That summer he met the love of his life, Marlys Clauson of Pelican Rapids, at a 4H camp in Crookston, MN.

Dad worked at Holten Hardware for the first 4 years out of high school, during that time he also earned his pilot’s license.  He joined the US Air Force in 1950 and attended basic training in Texas.  He was later stationed in California and Kansas City.

He married Marlys on June 21st, 1952.  Nine days later he was sent out to be stationed in Tripoli, Libya, North Africa.

He was honorably discharged in 1954 as a Staff Sargent.  Following his discharge, he and Mom started their family on the Jennen home farm north of Fergus Falls.

The first few years were a challenge as they had 3 of their 7 children within a 24 month period and no running water in the house!

Dad was very proud of his Grade A, dairy with 60 milk cows and an assortment of calves, bulls, horses and pigs.

In the Fall of 1965, they sold the dairy business and purchased a grain farm near Elbow Lake, MN.

Dad was a meticulous farmer and excelled at raising and selling certified seed.

Dad was a devout member of St. Olaf’s Catholic Church where he served as the Trustee for many years and was a member of the Knights of Columbus. The family would often join as he prayed the rosary every evening.

Upon retirement, Dad and Mom moved to the brick house of their dreams in Elbow Lake.  He and Mom took many wonderful trips all over the world. They wintered in Mesa, Arizona where you would most likely find him in the swimming pool, sauna or hot tub.

He enjoyed fishing with his grandkids and spent many hours passing on his pride and vast knowledge of farming.

Interment will be at St. Loretto Catholic Cemetery, Elbow Lake

In lieu of flowers, the family prefers donations to the Covenant House, or Mass Intentions.

To order memorial trees or send flowers to the family in memory of Richard Jennen, please visit our flower store.