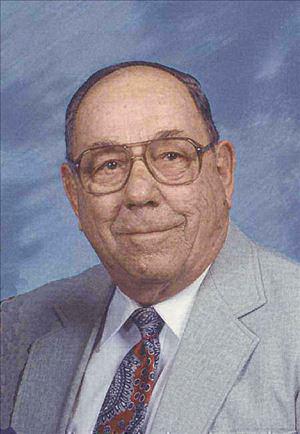 Richard Grout, 92, Fergus Falls, formerly of Elbow Lake, died Saturday, May 19, 2012, at the Minnesota Veterans Home in Fergus Falls. The memorial service for Richard Grout will be held at 1:30 pm on Friday, May 25, 2012, at United Lutheran Church, Elbow Lake, with the Rev. Bob Toso officiating. Burial will be in the Union Cemetery, Elbow Lake. Visitation will be at the Erickson-Smith Funeral Home, Elbow Lake, on Thursday from 4-6 pm and will resume at the church on Friday one hour prior to the service. Richard Carson Grout was born on November 28, 1919, in Great Falls, Montana, to Judd and Helen (Carson) Grout. The family lived on a sheep ranch in central Montana until moving to Elbow Lake when Dick was a young teen. He graduated from Elbow Lake High School in 1938 and continued his education at the Perry Institute – Electrical School in Yakima, Washington. From 1941-1942, Dick worked as an electrician with H. Arthur Johnson. He enlisted in the Army Air Corp on February 5, 1942, and was stationed on the Island of Tinian in the South Pacific during World War II. The Enola Gay took off on his runway to drop the atomic bomb on Japan. He reached the rank of Master Sergeant and was a crew chief on the bombers. Dick was honorably discharged on January 1, 1946. Upon his return to Elbow Lake, Dick worked as a parts man for Huseth & Waye in their implement dealership. On October 12, 1947, he married Louise Olson. Dick purchased the Culligan dealership in 1954 and he owned and operated the business until he sold it to Lee Saxton. Following his retirement, Dick worked at the Coast-to-Coast hardware store, drove fertilizer truck, and hauled sugar beets. He loved camping with Louise and his family and always seemed to end up in his beloved Montana. Dick was an outdoorsman and loved to fish, hunt and trap. He loved to golf and was one of the early volunteers who helped build up Tipsinah Mounds Golf Course. For over 20 years, he enjoyed being a winter Texan and considered camping with Louise as one of his highlights. He was a member of the Elbow Lake C & C and was past president. He was also a member of the Lions Club where he had served as president. Dick was a lifetime member of the Elbow Lake American Legion Post 321. For the last two and a half years, Dick called the Minnesota Veterans Home in Fergus Falls his home. He enjoyed playing cribbage with Jim Madison, Vernon Swift and Jerry Schultz. You could never tear him away from bingo at the Home and he pretty much made a living from the game, all in quarters. Survivors include his two sons, Tom (Diane) Grout of Elbow Lake and Randy (Beverly) Grout of Bigfork, Montana; six grandchildren, Geoffrey (Crystal) Grout, Dawn (Adam) Lares, Ben (Kelly McInnis) Grout, Danny (Courtney) Grout, Jason (Magen) Grout, and Amy Grout; seven great-grandchildren, A.J., Joseph, Alexa, Lillian, Jaycie, Grayson, and Ella. Dick was preceded in death by his wife Louise; parents Judd (Jack) and Helen Grout; and two brothers, Roland and Edwin (Jule) Grout.

To order memorial trees or send flowers to the family in memory of Richard Grout, please visit our flower store.