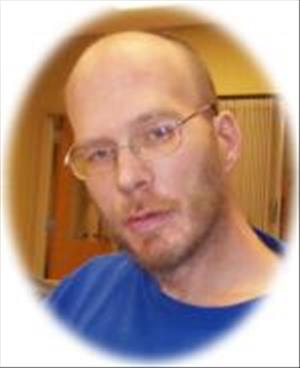 Richard Brewster, 45, long-time resident of Fargo, ND, died Sunday, Jan. 30, 2011, at the Jamestown Hospital, Jamestown, ND. He was born on New Years' Eve, 1965, in Augsburg, Germany. Rick spent his early childhood in Germany and attended kindergarten in Heidelberg, Germany. He spoke the German language from early childhood on. In 1975, the family settled in Moorhead, MN, where Rick graduated from Moorhead Senior High School in 1984. He was employed at Premier Technology in West Fargo, ND, assembling intricate Pin Ball machines and was awarded the "Employee of the Month" and "Employee of the Year" awards. At 18, he was diagnosed with Paranoid Schizophrenia and from then on moved from one care facility to another. He lived the last three years at the Villa Maria Nursing Home in Fargo, ND.

Rick liked bowling, fishing, and his favorite past time was watching the Vikings on TV. He liked family outings, and his favorite food was pizza. He enjoyed celebrating Valentine's Day and his birthday. Rick always had a good sense of humor and maintained a positive nature during his many years of illness.

He is survived by his mother Elly Brewster and her life partner, Rodney Christianson, of Elbow Lake; sisters Teresa Mogard of Horace, ND, and Jane Aubol of Moorhead, MN, and his half-sister Lynn Catherine of Dilworth, MN. He will also be missed by his Aunt Irma and Uncle Rudi Reitmeir, and his cousins Harald and Juergen, all in Germany, as well as his many nieces and nephews, and his friend and brother-in-law to be Mark Nelson.

Rick was preceded in death by his half-brother Randy Brewster.

Family will greet friends at the Funeral Home one hour prior to the service.
To order memorial trees or send flowers to the family in memory of Richard Brewster, please visit our flower store.