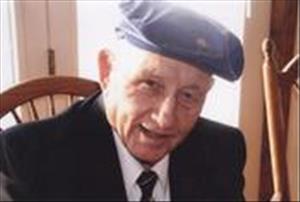 Raymond Keep, 85, of Hoffman, died Friday, Mar. 11, 2011, at Stevens' Homes Plus, rural Barrett. Raymond Earl Keep was born on September 13, 1925, to William and Elizabeth (Auger) Keep in Grant County, Minnesota. He was baptized and confirmed at St. Charles Catholic Church in Herman and attended country school through the 8th grade. Ray joined the Navy on September 10, 1943, and served his country for eight years. Ray was united in marriage to Lois Irene Reuss on April 1, 1954, and the couple made their home in Hoffman where they were blessed with three children, Georgette, Gary and Heidi. He became a merchant marine on the Great Lakes for the Interstate Steamship Company, beginning his career as a deck hand, working his way to a wheelsman, and after much hard work and studies, Ray made the rank of Captain. The Company hauled taconite/iron ore for many years before taking on grain as cargo. Ray shared many stories of his adventures on the Great Lakes that his family and friends will long remember. Following his retirement, Ray returned to Hoffman where he was a member of the Zion Lutheran Church. He was also a member of the American Legion Post in Herman before joining Post 393 of Hoffman and was a member for 63 years. Ray enjoyed fishing, ice fishing, gardening and yard work. Raymond passed away peacefully on March 11, 2011, at the StevensA�A�A½ Homes Plus, rural Barrett, with his daughters at his side. He is survived by his children Georgette (Fitzpatrick) and Steve Buntrock, Gary and Lori Keep, and Heidi and Tom Fridgen; grandchildren Paul Fitzpatrick, Stacy (Keep) and Ken Rosckes, Amy (Fitzpatrick) and Sondro Muniz, Jennifer Keep, Zach Fridgen and Josh Fridgen; great-grandchildren Katie, Austin and Ashlin Muniz, and Gabrielle and Nathan Rosckes; sister-in-law Lorretta Keep; and many nieces, nephews, other relatives and friends. Ray was preceded in death by his parents William and Elizabeth Keep; his wife Lois; four brothers, Harold, Kenneth, Wayne and James; three sisters, Frances, Ruth and Lorraine; parents-in-law Edward and Hazel Reuss; son-in-law Tim Fitzpatrick; sister-in-law Betty Keep; and brothers-in-law Inez Wiezman, Charles Kennedy, and Larry Johnson. Service: 11:00 am Wednesday, March 16, 2011, Zion Lutheran Church, Hoffman, Rev. Donald Wagner Visitation: 4-7 pm Tuesday, March 15, at the Erickson-Smith Funeral Home in Hoffman. Interment: Zion Cemetery, Hoffman

To order memorial trees or send flowers to the family in memory of Raymond Keep, please visit our flower store.