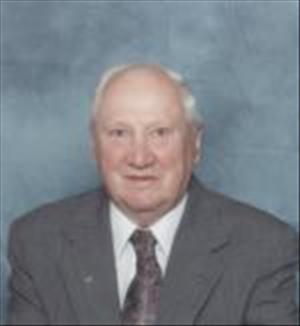 Visitation: 4-7 pm Wednesday, Erickson-Smith Funeral Home in Hoffman; prayer service at 7 pm. Visitation will resume at the church one hour before the service on Thursday.

Raymer Merril Stock was born on November 30, 1926, in rural Land Township to Paul and Phoebe (Randin) Stock. He was baptized at Emmanuel Lutheran Church, rural Morris, on March 6, 1927, and was confirmed at Bethel Lutheran Church in Hoffman on June 1, 1941. Raymer attended District 41 Country School through 8th grade and attended Hoffman High School, graduating in 1944. He enjoyed playing basketball and baseball, both in high school and on the local home team. After graduation, Raymer farmed with his dad on the home farm raising crops and cattle.

On February 23, 1952, Raymer was united in marriage to Arlene Reuss, and the couple lived on the home farm in Land Township. To this union were born two children: Raelene and Roni. Raymer raised cattle and loved the land he farmed. He received the Soil & Water Conservation award in 1960. Raymer was a 4-H leader of the Happy Landers 4-H Club when the girls were young and was a charter member of the Club. He was also a Mallard Seed Corn dealer and grew the best sweet corn. He was proud of his "Infinite Delight" variety and enjoyed sharing it with relatives and friends.

Raymer had served as supervisor for Land Township for many years and was a member of the Hoffman Co-op Oil Board of Directors. He was active in Lands Lutheran Church and later, Messiah Lutheran Church, where he served in different capacities.

In 1996, Raymer and Arlene retired and moved into Hoffman. They enjoyed traveling and spending time with family and friends. He enjoyed his children, grandchildren and great-grandchildren. Raymer enjoyed his deer hunting trips to northern Minnesota over the years with his school buddies.

He was preceded in death by his parents Paul and Phoebe Stock, and two brothers, Elroy and Loren Stock.
To order memorial trees or send flowers to the family in memory of Raymer Stock, please visit our flower store.