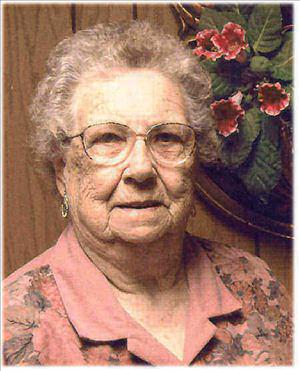 Pearl Norlien, 83, of Kensington, died Wednesday, March 28, 2012, at the St. Cloud Hospital. Funeral: 11:00 am saturday, March 31, 2012, Covenant Church, Kensington Clergy: Rev. David T. Wallin Cemetery: Pike Lake Cemetery, Kensington Visitation: One hour prior to service Pearl was born June 30, 1928, at home in Ben Wade Township near Lowry, Minnesota, to Carl and Ellen (Anderson) Moberg. She attended country school near Lowry and during her 8th year in school, moved to Kensington where she graduated from the Kensington High School with the Class of 1946. She was united in marriage on September 17, 1950, to Milton Norlien at Pike Lake Covenant Church. The couple lived in Kensington for a short time before moving to a farm south of Kensington where Milton and Pearl farmed together. In addition to being a partner on the farm and maintaining the household for her family, Pearl also worked at Hakes Variety in Alexandria, the Kensington restaurant and the bowling alley, Fingerhut in Alexandria, and retired in 1990 after 20 years with 3M in Alexandria. On November 10, 1996, Milton passed away, and Pearl moved into Kensington in 1998. She was a member of the Kensington Covenant Church. Pearl enjoyed her family and especially her grandchildren. Survivors include her sons Darwin (Charlotte) Norlien and Laurel Norlien, both of Kensington; her brother Dale (JaVane) Moberg of Brooklyn Park; sister-in-law Nelorie Moberg of Kensington; six grandchildren, Jason, Joshua (Imelda), Matthew (Diamond), Mark, Amy and Angela Norlien; and three great-grandchildren, Samaria, Julia and Leah Norlien. Pearl was preceded in death by her parents, her husband Milton, an infant daughter Dawn in 1951, brothers Edward and Harold Moberg, and one sister-in-law, Virginia Moberg.

To order memorial trees or send flowers to the family in memory of Pearl Norlien, please visit our flower store.