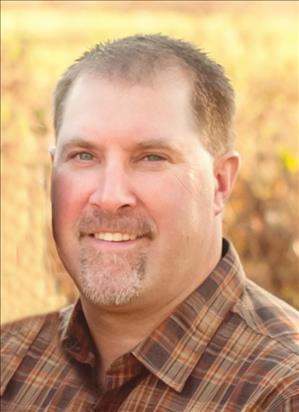 Patrick D. Anderson, 45, of Hoffman, died Saturday, July 30, 2016, as the result of an ATV accident. Patrick Dell Anderson was born on September 24, 1970, in Morris, MN, the son of Dale and Betty (Norman) Anderson. He was baptized and confirmed at Bethel Lutheran Church in Hoffman. In 1981, at the age of 10, Pat lost his arm in a farm accident. Instead of the family teaching Pat how to deal with his loss, Pat taught his family how to overcome all obstacles and to persevere no matter what. This was a lesson that he would go on to teach and model on a daily basis throughout his life. Growing up on the farm, Pat learned a love of the land and a passion for farming. Pat attended school in Hoffman and graduated from Hoffman­Kensington in 1989. He went on to Moorhead State University and graduated with a Bachelor's Degree in Secondary Education. Pat started his teaching and coaching career at Red Rock Central School in Lamberton, MN, where he met the love of his life. Teaching for just one year in Lamberton, Pat returned to the Hoffman area and began to farm with his father, Dale, and brother, Paul. During this time he continued his teaching and coaching career at Hancock. Pat "PA" began teaching at West Central High School in the fall of 1999 as a Social Studies teacher. He was also active in coaching with various positions in football and basketball but was most notably the coach for the Varsity Girls Basketball team at WCA. Pat taught Social Studies until taking the position of Activities Director and Dean of Students in 2010. He had a gift for reaching students and could offer discipline with only a look. Pat respected his students and gave them special understanding and in turn they loved him. Pat was thankful for the opportunity to coach his own children and was instrumental in starting the Prairie Rivers Baseball Association. Pat and Jacki Coulter were married on July 20, 1996, at Our Savior's Lutheran Church, in Lamberton, MN. Pat and Jacki were best friends and shared a love of life. They were blessed with three children, Benjamin Patrick, Ross James, and Brooke Lauren. Pat's family was everything to him. His passions were watching and coaching his children in sports, teaching his boys farming, snowmobiling, watching the L.A. Lakers, country music and especially going to WE Fest with Jacki and friends. Pat was known for his gift to tell stories. He raised his family on the farm where they enjoyed many special memories of being side by side and working together. Pat is survived by his wife of twenty years, Jacki of Hoffman: three children, Benjamin, Ross and Brooke, all at home; his mother, Betty Anderson of Hoffman; five siblings, Cindy Anderson­Eull of Fergus Falls, Paul (Carol) Anderson of Hoffman, Jean (Darrell) Connell of Alexandria, Carolyn Olson of Foley, and Jaclyn (Todd) Walter of Pine Island: his mother-in-law, Janice Coulter of Lamberton; sisters-in-law Kari (Bob) Halter, Tammy Schenk, and Jodi (John) Smith; brother-in-law Jeff Coulter (fiancée Elise); many nieces, nephews, aunts, uncles, relatives and friends. He was preceded in death by his father, Dale; father­-in­law, Moe Coulter; paternal grandparents, Nels and Grace Anderson; and maternal grandparents, James Henry and Ruth Norman. In lieu of flowers, memorials are preferred. Visitation: 4 - ­8 PM Thursday at Messiah Lutheran Church in Hoffman and one hour prior to services Funeral Service: 10:30 AM Friday, August 5, 2016, at Messiah Lutheran Church Clergy: Reverend Nathan Thompson Interment: Bethel Cemetery, Hoffman Arrangements are entrusted to the Erickson­-Smith Funeral Home of Hoffman Online guestbook: EricksonSmithFH.com To order memorial trees or send flowers to the family in memory of Patrick Anderson, please visit our flower store.