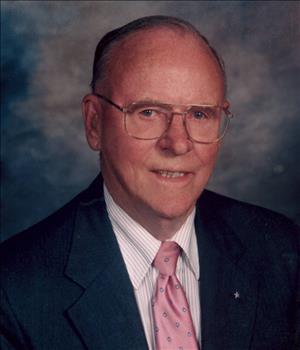 Oscar E. Lindgren was born November 3, 1915 in Douglas County, Minnesota to "Ole" and Marie (Person) Lindgren. He grew up in Douglas County on a farm near Lobster Lake. He was united in marriage to Irene Drum on September 20, 1941 in Glenwood. The couple farmed for several years on the home farm and a farm near Osakis. In 1946, Oscar started a plumbing business in Hoffman. Oscar was noted for being "on call" at any hour of the day. He retired in 1983 at the age of 68. He and Irene spent winters in Arizona until 2009 and summers at their home on Elk Lake. Oscar enjoyed fishing, playing pool, where he won dozens of trophies, dancing and traveling – the highlight being trips to Sweden and Germany. He and Irene particularly enjoyed traveling in the southwestern United States. He enjoyed renewing the look of the town by building several new houses where old ones needed to be torn down. Oscar Lindgren, formerly of Hoffman died Friday, September 19, 2014 at the Browns Valley Health Center, Browns Valley, MN at the age of 98. Oscar is survived by his wife, Irene of Hoffman & Browns Valley; daughters, Marlene (Ronald) Sanasack of Dumont, Gloria (Michael) Young of Alexandria and Phyllis Canfield of Spokane, WA; 8 grandchildren; 19 great-grandchildren and 4 great-great-grandchildren. Oscar was preceded in death by his parents; 3 brothers and 3 sisters; 2 grandsons, Mark & John Sanasack. Funeral: Tuesday, September 23, 11:00 AM at Messiah Lutheran Church, Hoffman Clergy: Reverend Nathan Thompson Visitation: One hour prior to the service at the church Interment: Evergreen Cemetery, Alexandria Condolences: EricksonSmithFH.com

To order memorial trees or send flowers to the family in memory of Oscar Lindgren, please visit our flower store.