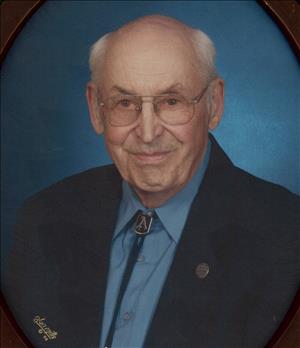 Orvin Kenneth Ackerson, 90, of Elbow Lake, MN , died on Sunday, March 1, 2015 at the Brandon Assisted Living Center in Brandon, MN. Orvin Kenneth Ackerson, was born on February 24, 1925 at the Barrett Hospital in Barrett Minnesota, the son of Vance Leland & Altha (Kuchenbecker) Ackerson. He graduated from Elbow Lake High School in 1943. On September 20, 1947 he married Jean Carol Sallberg at First Lutheran Church in Dassel, MN. They were the parents of two children, Lee and Bonita. Orvin resided in the Elbow Lake area and farmed. In 1953 he joined Bethlehem Lutheran Church where he was financial secretary for four years. He was also a member of the Union Cemetery Board, and the Elks Lodge in Fergus Falls. In the summer of 1960 he moved to the farm once owned by his grandparents (Otto and Minnie Kuchenbecker) and resided there until September of 2013 when he moved to Maplewood Manor apartments in Elbow Lake. Orvin's interests included hunting and fishing, especially in Wyoming, Wisconsin and Montana. Orvin's favored fishing spots were Lake Superior, Lake Michigan and around his home. He was also an avid gardener who supplied produce for friends and family. He was preceded in death by his parents, Vance & Altha and a brother, Ansem. He is survived by his wife, Jean; a son, Lee (Barbara) Ackerson of Plymouth, MN and a daughter, Bonita (John) Augustyn from Villa Rica, GA; a brother, Jack (Madonna) Ackerson of Peach Tree City, GA; three grandchildren, Kirby (Jodi) Lesto, Mindy Lesto, Tawney (Josh) Jameson; six great-grandchildren Kiana, Brooke, Tyler, Alexa, Sascha and Lola; sister-in-law, Audrey Ackerson, along with numerous nieces and nephews. Memorial Service: 1:00 P.M. Saturday, March 7, 2015, at the Bethlehem West Elbow Lake Church, Elbow Lake, MN, with a memorial gathering one hour prior to the service. Interment: Union Cemetery, Elbow Lake, MN Funeral arrangements are with the Erickson-Smith Funeral Home in Elbow Lake. To order memorial trees or send flowers to the family in memory of Orvin Ackerson, please visit our flower store.