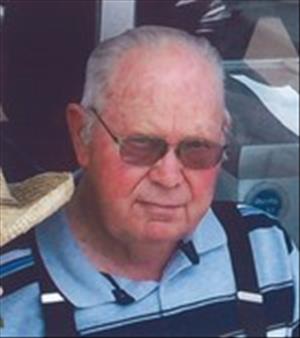 Orville was born in Jackson, Minnesota, on April 24, 1925, to Samuel A. and Thora R. (Jensen) Leverson. He was baptized at Our Saviors Lutheran Church in Jackson, confirmed on July 2, 1939, at Immanuel Lutheran Church in Dunnell, Minnesota, and attended Sherburn High School through the 10th grade. On July 10, 1945, Orville enlisted in the United States Navy and served with the SeaBees on Guam as a Seaman First Class. He was honorably discharged on August 18, 1946, and began farming. He was united in marriage on September 7, 1952, to Luella Wiederhoeft at South Branch Lutheran Church, rural St. James. Following their marriage, Orville began farming near Lowry and, later, south of Kensington. In 1968, they bought a home in Kensington, where he was a diesel mechanic at the Kensington Farmers Elevator. Orville then worked as a carpenter with his brother Kenny at the Starbuck Lumber Yard. He served as the Waste Water Manager for the City of Kensington until he retired. Orville was a 61-year member of the Kensington Legion Post 268 where he served as commander for several years. He was also Scout Master of Troop 479, and served on the Kensington Volunteer Fire Department. Orville was the first original "recycle or reuse" man who held the opinion that everything had a use. He also loved to tinker with and fix things and was known as the neighborhood "fix-it" man. He loved to travel, making several trips to Alaska where he would stay with his son Curtis and do a lot of sight-seeing and fishing. He was an explorer and loved to camp out. He was an avid dancer and loved to Polka, Waltz and square dance. Orville enjoyed making his homemade wine, and his family always enjoyed it during the holidays and other special events. He had a good sense of humor and always seemed to know the right words to say. Orville always had time to spend with his children and grandchildren. Survivors include his wife of 57 years, Luella of Kensington; sons Curtis (Gloria) of Anchorage, Alaska, Jerry (Gail) of Wadena, Minnesota, and Bruce (Tammie) of Alexandria; daughter Emmy Maheux of New Hope, Minnesota; six grandchildren, Brandon Leverson, Adam Leverson, Erika (Ryan) Forga, Sarah (Justin) Carlstrom, Brian Leverson, and Lawrence Lawson; brothers Kenny Leverson and Harold "Rusty" (Marcia) Leverson, and sister-in-law Leone Leverson. He was preceded in death by his parents, brother Vernon Leverson, sister Lucille "Lucy" Wingert, brother-in-law Ivan Wingert, and sister-in-law Alice Leverson.
To order memorial trees or send flowers to the family in memory of Orville Leverson, please visit our flower store.