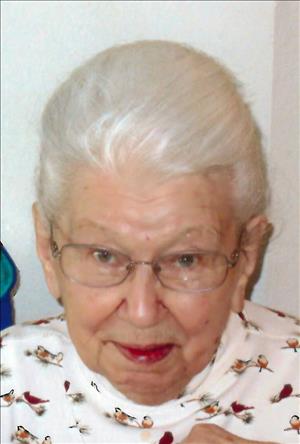 Norma Aanenson, 94 of rural Kensington died Tuesday, Jan 12, 2016 by Alexandria, MN. Norma Eunice Hanson was born on November 9, 1921, the daughter of Joe and Viola (Scott) Hanson. She attended the Valley Springs Public School and graduated in 1939. Norma and Alvin Aanenson were married on February 9, 1941. After their marriage they lived in southern Minnesota, and in 1946 moved to their present farm in Kensington. She worked as a homemaker, and in her later years worked in the kitchen at the Hoffman Nutrition Center. Norma was a member of the Solem Lutheran Church and Ladies Aide and the Kensington American Legion Auxiliary. She enjoyed embroidering, bowling, bingo, cooking, making lefse (Queen of Lefse) and was most passionate about bingo.She enjoyed her family, especially her grandchildren. She is survived by two daughters, Diana Aanenson of Alexandria, and Dawn Johnson of Hoffman; four sons, Douglas and David Aanenson both of Kensington, Danny (Ginny) Aanenson of Hoffman, and Dean (Michelle) Aanenson of Alexandria; seven grandchildren, eight great-grandchildren; sister-in-law, Janice Hanson of Brandon, SD; one niece, Donna (Omar) Petterson of Canton, SD; two nephews, Jim Hanson and Joel (Linda) Hanson all of Valley Springs, SD, and by numerous relatives and friends. Norma was preceded in death by her husband, Alvin on December 21, 1985; infant son, Donald; sister, Ione Hanson and brother, Robert Hanson. Funeral Services: 11AM Tuesday, January 19, 2016 at Nora Lutheran Church, Kensington with visitation one hour prior to the service. Clergy: Reverend Irving Arnquist Interment: Solem Lutheran Cemetery Erickson-Smith Funeral Home, Hoffman Visitation one hour prior to the service at the church.

To order memorial trees or send flowers to the family in memory of Norma Aanenson, please visit our flower store.