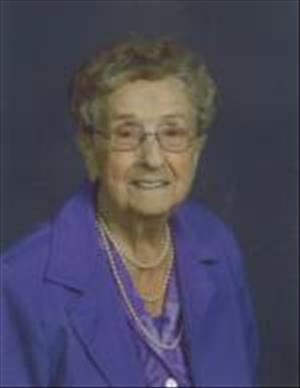 Nina Mildred Johnson was born July 21, 1916, the youngest daughter of Andrew and Tilda (Swedberg) Hedstrom. They lived on a farm east of Herman now occupied by the Corey family. Nina's mother died in the worldwide flu epidemic in 1919. This was a severe loss, but the family pulled together to get through difficult times. Nina was baptized and confirmed in Bethel Lutheran Church of Herman. She attended District 69 school, which was located on the farm now owned by Jerry and Joan Oachs, and graduated from Herman High School.

Nina married Robert W. Johnson of Fordville, North Dakota, on June 12, 1933. They lived in Fordville, Herman, and Farwell. In 1940, like many other Midwesterners, they moved to California. Bob worked at Lockheed Aircraft for his entire career. In 1950, Nina began working in the restaurant at Universal Studios, one of the biggest producers of films. She was an excellent waitress and was soon assigned to serve the tables of top Hollywood stars and executives. She served many visiting dignitaries and world leaders who came as guests to Universal Studios. She had good stories to tell about these experiences.

Nina and Bob retired in 1975 and moved back to Minnesota buying a house in Morris. Upon Bob's death in July 1991, Nina moved to Hoffman, the place where her parents had first settled. She joined other brothers and sisters who also returned to live in Hoffman.

Nina was blessed with a long and healthy life. She enjoyed people. In California, she and Bob were members of the Vasa Lodge and had many friends. She enjoyed fishing, RV camping, card games, handicrafts and entertaining. Her hospitality was inexhaustible, and she always extended a welcome to neighbors, friends and family to come and enjoy food. Family from near and far, friends from California and elsewhere, and relatives from Sweden came to spend time with her. Nina's high energy was amazing to all. She was a member of Messiah Lutheran Church and active in the Hoffman Senior Center for many years.

Nina is survived by one brother, Dennis (Laila) Hedstrom of Hoffman. She will also be especially missed by nieces and nephews who found comfort in her home.

She was preceded in death by her parents, her husband Bob, and siblings Melvina (Mrs. Richard Lueneberg), Mabel (Mrs. Fred Mattson, Gladys and Ethel, both of whom died in childhood, Darwin, Alvin, and Tillie (Mrs. David Johnson).

Visitation: 1 hour prior to service
To order memorial trees or send flowers to the family in memory of Nina Johnson, please visit our flower store.