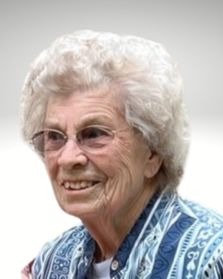 Nellie was born on January 3, 1921 to in Deland, Illinois as the sixth child of fourteen to John and Martha (Doernfel) Fowler. At an early age the family moved to Terril, Iowa, then to Estherville, Iowa where she grew up. She graduated high school from Estherville in 1940. She was employed at Holy Family Hospital in Estherville. On September 2, 1954 she was united in marriage to Merle Phillips of Wendell, Minnesota in Estherville. They made their home on the family farm outside of Wendell. Nellie was a member of Lawrence Presbyterian Church in rural Wendell where she served as a Sunday School teacher, superintendent of the Sunday School, and sang in the church choir. Due to Merle’s failing health they moved to an apartment in Fergus Falls in 2007. After Merle’s death in 2010, Nellie moved to Park Gardens. She later moved to Alcott Manor, and then LB Broen Home due to her failing health.

Nellie is preceded in death by her husband Merle, daughter Marcia, her parents, her grandparents, five brothers, eight sisters, and numerous other relatives.

She is survived by her son Mark (Deana) and her grandsons: Michael of Prior Lake, MN and Brent (Angela Dowis) of Pocatello, ID.

Funeral Service will be held Saturday, November 5, 2022 at 2:00 PM at Lawrence Presbyterian Church in Wendell, MN, with a Visitation beginning at 1:00 PM.

Interment following the service at the Lawrence Presbyterian Cemetery.

To order memorial trees or send flowers to the family in memory of Nellie Mae Phillips, please visit our flower store.