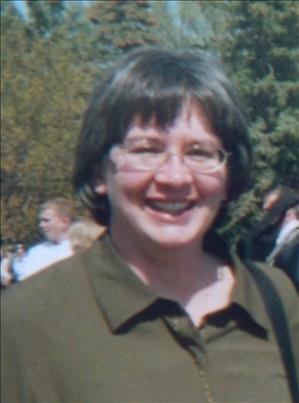 Nancy Volker, 55, of Herman, passed away Monday, September 22, 2014, at her home, under the care of her family, friends and Knute Nelson Hospice. Nancy Jean Henkel, daughter of Arnold and Dorothy (Zeller) Henkel, was born February 7, 1959 in Granite Falls, Minnesota, where she was baptized and confirmed at St. Andrew's Catholic Church. Nancy attended school in Maynard and Clara City where she graduated in 1977. She continued her education at Willmar Area Technical Vocational Institute (WAVI) where she graduated in 1978. Following her education, Nancy moved to Donnelly where she began working at the Morris Sun Tribune. On March 29, 1980, she was united in marriage to Kevin Volker at St. Theresa's Catholic Church in Donnelly. From this union two children were born, Aaron and Kayla. In 1982, Nancy accepted a position at Duplicating Services at the University of Minnesota Morris, where she continued to work until December 2013. Nancy passed away on September 22, 2014 at the family farm in rural Herman after a four year long courageous battle with cancer. She lived to reach the age of 55 years. Nancy is survived by her husband: Kevin Volker of Herman; children: Aaron (Molly) Volker of St. Cloud and Kayla Volker of Herman; three grandchildren: Erin, Andrew, and Henry Volker of St. Cloud; mother: Dorothy Henkel of Clara City; siblings: Mike (Audrey) Henkel of Kiester, Mark (Jane) Henkel of Maynard, Steve (Mary) Henkel of Pennock, Gretchen Fretheim of Plymouth, Karen Henkel of Clara City, and Susan Henkel of Willmar; and many nieces and nephews. Nancy is preceded in death by her father: Arnold Henkel; granddaughter: Nora Volker; mother and father-in-law: Nancy and Lloyd Volker; infant brother: Kevin. A gathering and celebration of Nancy's life will be held from 1 – 4 PM Saturday, September 27, 2014, at Erickson-Smith Funeral Home, Hoffman. Private family interment will take place at a later date in Lakeside Cemetery, Herman. Condolences: EricksonSmithFH.com

To order memorial trees or send flowers to the family in memory of Nancy Volker, please visit our flower store.