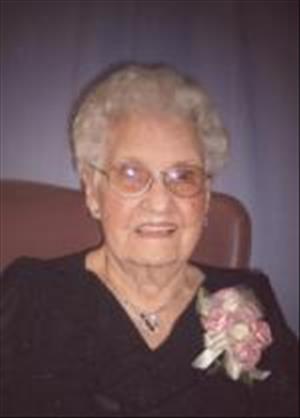 Visitation: 2 hours prior to service

While there, she met and eventually married the love of her life, Robert (Bob) Raatz in a Presbyterian church in Pipestone on June 14, 1935. Bob pursued his career as a farmer and Myrtle as a teacher. On November 27, 1939, the first of their two children was born, Robert Kenneth Raatz. Bob was born six weeks early and provided some interesting times. About two years later, the second child, Carol Jean Raatz, was born at the home of Myrtle's sister on November 2, 1941.

Bob and Myrtle moved to the Morris area in the early 1940's. Bob continued to farm, and Myrtle continued her career as a teacher. Along with the farming and teaching, the couple owned a drive-in fast food business, The Pylin. With all this going on, Myrtle still managed to take summer classes and graduated from Moorhead State Teachers College in 1968 with her teaching degree. In 1974, after 38 years of teaching, Myrtle decided to retire. She then held a part-time position at the post office in Kensington for six years.

Myrtle always loved her family and friends. She loved family gatherings and holiday get-togethers. She had a special place in her heart for teaching young children. She was the "favorite teacher" of many of the children she taught. Myrtle was active in her church, the 55-plus club, driving for seniors with medical appointments, and the list goes on.

Perhaps her greatest recreational passion was fishing. She became a bit of a legend on Lake Rachel. Many days she could be seen on the lake, just her, her big hat, and her black poodle. She never had a bad day of fishing, some just better than others.

She left us on October 4, 2010, for better fishing and to once again be with her many family and friends. May God bless the loving memory of Myrtle May Raatz.

She was preceded in death by her husband, her mother and father, four brothers, two sisters, and one grandson, Donovan Raatz.

For her efforts with young people, the world has to be a better place for each of us. May God bless the memory of her in all our hearts and lives.
To order memorial trees or send flowers to the family in memory of Myrtle Raatz, please visit our flower store.