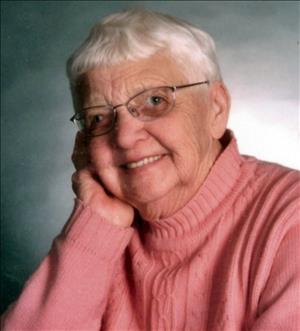 Myrtle "Polly" Pauline Kube was born on April 2, 1920 in Battle Lake, MN to Peder & Amy (Erickson) Bosen. She grew up in Battle Lake, graduating from Battle Lake High School in 1938. On August 16, 1941, she was united in marriage to Peter Cooper Kube in Battle Lake. The couple made their home in rural Campbell where they farmed. In 1948, they moved to Barrett where they continued farming. To this union three daughters were born. In 1976 they retired from farming and moved to Elbow Lake. After their retirement, they spent their winters in Arizona. Peter passed away on April 6, 1988. After Peter's passing, Polly spent much of her time building and developing Kube Park. Polly enjoyed painting, playing whist and canasta and she was a fantastic lefsé maker. She was difficult to defeat when playing Scrabble. She liked to collect turtle figurines. When she remodeled her house, she built on a "party room" where many joyous times were spent with her children, grandchildren and friends. On Sunday, January 4, 2015, Polly passed away at the Johnson's Home Plus in Barrett at the age of ninety-four years. She will be dearly missed by family and friends. Polly is survived by her three daughters, Carolyn "Duffer" Windom of Galesburg, ND, Judy Johnson of Elbow Lake and Susan (Christopher) Ray of Barrett; brother-in-law, Bennie Cooper; eleven grandchildren, David (Jackie) Windom, Debra Hyde, Donna Windom, Douglas (Donna) Windom, Michelle (Andrew Greengrass) Johnson, Beth (Dennis) Heifner, Jeremy (fiancé, Sonal) Johnson, Nathan Ray, Matthew (Gretchen) Ray, Sarah (Quentin) Pollard, Peter (Jenna) Ray. Preceded in death by her parents, her husband and brothers and sisters. In lieu of flowers, memorials are preferred to Lakeland Hospice. Visitation: One hour prior to the service at the church Funeral: 11:00 AM, Saturday, January 10, 2015 at Lawrence Presbyterian Church, Wendell Interment: Lawrence Presbyterian Cemetery Arrangements: Erickson-Smith Funeral Home of Elbow Lake Condolences: EricksonSmithFH.com

With visitation one hour prior to the service at the church.

To order memorial trees or send flowers to the family in memory of Myrtle Kube, please visit our flower store.