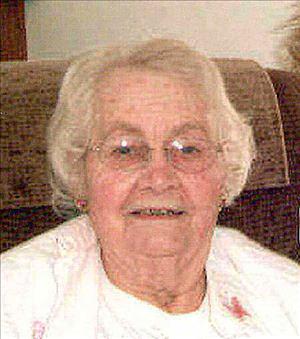 Myrtle Minnie Lohmeyer Allen, 94, formerly of Hoffman, died Saturday, January 04, 2014, at the Golden Living Center in Henning. The funeral service will be held at 2:00 pm on Thursday, January 9, 2014, at the Zion Lutheran Church in Hoffman with the Rev. Donald R. Wagner officiating. Visitation will begin at 11:00 am at the church on Thursday. Burial will be held at the Zion Lutheran Cemetery, Barrett. Myrtle was born on March 26, 1919, in Fergus Falls, Minnesota, the daughter of Christ and Elsie (Stien) Thom. Myrtle completed the 8th grade in the Freburg Township country school near where the family lived and farmed. As a young girl, Myrtle attended the Zion Lutheran Church of East Freburg where she was baptized, confirmed and married. Myrtle was united in marriage to William F. Lohmeyer on December 9, 1938, by Pastor Walter Feiedrich. Their first-born son Karl died in 1950 at the age of ten. Surviving children are son Paul (Shirley) Lohmeyer of Ten Sleep, Wyoming, and daughter Charlotte (Maynard) Gulbranson of Alexandria, Minnesota. Myrtle was active in the Zion Lutheran Church of Barrett where she taught Sunday school and was active with the Ladies Aid and served as representative for ladies group meetings. She was an active 4-H leader and participated in the local homemakers group. Myrtle actively served for six years on the women's programs of the Farm Bureau. She did volunteer work for the county and regional Dairy Association, serving as one of the judges for the Dairy Princess contests in Long Prairie, Wadena and Alexandria. Myrtle lived on the farm with her husband William until they retired in 1976 and moved to Hoffman, Minnesota. They enjoyed their retirement and traveled extensively throughout the United States and many foreign countries, including Canada, Japan, Mexico and Europe. William passed away in 1981. In September of 1991, Myrtle was married to E. J. "Bud" Allen. He died in March of 1992. She is survived by her son Paul (Shirley); five step-grandchildren, Jeff Harstad, Renee Lynch, Scott Harstad, Doreen Strom and Todd Harstad; 12 step-great-grandchildren and six step-great-great-grandchildren; her daughter Charlotte (Maynard); her grandchildren, Robert Haberer, James (Shari) Haberer, David (Lori) Haberer, Eric Haberer and Karlene (Mark) Doll; her eight great-grandchildren; and by her nieces, nephews and cousins. She is preceded in death by her parents; husbands William F. Lohmeyer and E. J. "Bud" Allen; her brothers Edwin Thom, Ernest Thom, Henry Thom and Arnold Thom; and her sisters Mildred (Thom) Lohmeyer, Margaret (Thom) Frautchie and Freda (Thom) Elmore.

To order memorial trees or send flowers to the family in memory of Myrtle Allen, please visit our flower store.