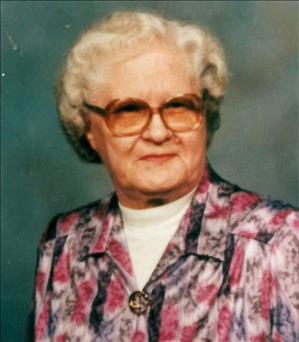 Muriel Murray, age 90, of Hoffman, passed away Wednesday, December 14, 2016, at the Evansville Care Campus. Muriel Adeline Murray was born on March 20, 1926, the daughter of Dorsey and Mathilda (Edman) Blehr. Muriel was baptized on September 18, 1926 in Holmes City by Pastor Anderson. She was confirmed on June 25, 1939, at Lands Lutheran Church in Hoffman by Pastor Quanbeck. She had Affirmation of Faith on May 31, 1981, by Pastor Frederick Buth at Zion Lutheran Church. Muriel attended country school in Urness Township through the 8th grade and then high school in Alexandria and Hoffman.

Muriel was united in marriage to Harvey Orvin Murray on April 24, 1946. They lived in Hoffman most of their married life. They were the parents of three daughters, Marlys, Brenda, and Renee. Besides being a homemaker all of her life, Muriel was the Evangelism Chairman for Zion Church for several years and the news correspondent for the Hoffman Tribune for 40 years, until she moved into the Evansville Care Center in November of 2013. She enjoyed reading, jigsaw puzzles, music, and crossword puzzles. She was preceded in death by her husband, Harvey on March 4, 1990; infant daughter, Marlys; parents, Dorsey and Mathilda; three sisters, Pearl Hogan, Vivian Lade and Irene Nylen; and one brother, William Blehr. She is survived by two daughters, Brenda Murray of Hoffman and Renee (Alan) Wark of Brandon; seven grandchildren, Donna (Dean) Toso, Diane Dukowitz, David and Daniel Murray, Michael Hokanson, Kristi (Jon) Simonson, and Corey (Tasha) Hokanson; thirteen great-grandchildren; two step great-grandchildren; one great-great-grandchild; and by nieces, nephews, relatives and friends. Memorials will be donated to Zion Lutheran Church or Zion Cemetery. Funeral Service: 1:00 PM, Monday, December 19, 2016, at Zion Lutheran Church in Hoffman. Visitation: Monday from 10 AM until 12 PM. Lunch will be served from 12 noon until the time of the funeral. Clergy: Rev. Don Wagner Interment: Zion Cemetery of Hoffman Funeral Home: Erickson-Smith of Hoffman Condolences: EricksonSmithFH.com

Visitation will be from 10AM to 12PM. A lunch will be served from 12:00PM until the time of the service at 1PM.

To order memorial trees or send flowers to the family in memory of Muriel Murray, please visit our flower store.