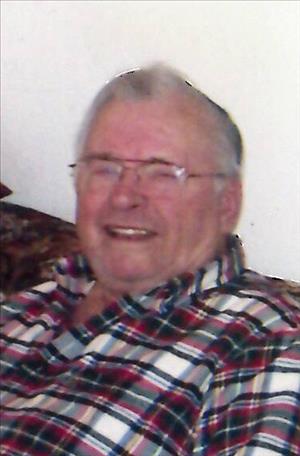 Milton Harold Erlandson was born May 9, 1925 to Adolph and Thora (Hole) Erlandson, into a family of nine children. He grew up on the family farm in Aastad Township and received his schooling through the 8th grade at the country school in Aastad Township. As a young man, he farmed with his father as his brothers were in the service.

Milton was united in marriage to Arlene Schmidt on May 9, 1948 at Trinity Church in Fergus Falls. To this union two daughters were born, Diane in 1950 and Barbara in 1951. The couple continued to farm in Aastad Township until 1955. From 1955 to 1992 they made their home on a farm south of Wendell. Milton grew corn, wheat, and soybeans. He also milked cows and later, raised Hereford beef cattle. A love for the land and animals were always in his farmer's heart. In the late 1960's, Milton earned his G.E.D. After he retired in 1992, he and Arlene moved into a home in Elbow Lake, and later into Maplewood Manor. Milton enjoyed community activities. Over the years, he was active on the Sister City committee, was on the ASCS board, Wendell elevator board and was an active member of the West Elbow Lake Lutheran Church, and in recent years Bethlehem/West Elbow Lake Church including the choir. He was also involved with the Grant County Barbershop chorus. He enjoyed fishing, playing cards, and watching the MN Twins. He was also very proud to be a Norwegian. Most important to Milton was his faith in God, his family and friends, and the community he lived and worked in. To order memorial trees or send flowers to the family in memory of Milton Erlandson, please visit our flower store.