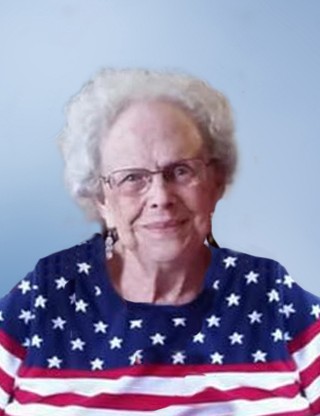 Mildred Gladyce (Lindberg) Tyberg of rural Elbow Lake passed away on August 27, 2019 at the age of 91. She was born on January 22, 1928 at New Effington, SD. Milly was the oldest child of eight born to her parents, Joe and Josie (Hultberg) Lindberg. She moved to the Battle Lake area as a child and attended rural school in Girard Township, then graduating from Battle Lake High School in 1947 as Salutatorian of her class.

While attending high school she worked at the Korner Café in Elbow Lake in the summer between her Junior and Senior year and again after graduating from High School. It was during this time that she met local farmer Sheldon Tyberg. She worked at the First National Bank of Battle Lake until 1951. She then moved to Denver, Colorado working at Denver National and Mountain State Bank for four years. On May 4, 1955, she married Sheldon. From this union they had two children Scott Arvid and Brenda Lea. After her marriage she worked at the First National Bank, ASCS and the Grant County Clerk of Court.

She was active in many community affairs. She was President of the Hospital Auxiliary, President of Elbow Lake Mrs. Jaycees and President of United Lutheran Ladies Aid. She also served as a release time and Sunday school teacher. She helped compile the Grant County Centennial book and the United Lutheran 50th anniversary book. She was active in the Grant County DFL; serving as treasure for several candidates. Each year she planned a get-together for the Battle Lake High School Class of 1947. She enjoyed volunteering at Bargain Bazaar in Elbow Lake for many years.

She enjoyed knitting, counted cross stitching and scrap-booking. She always was ready for a game of bridge, canasta or a trip to the casino. She loved working challenging crossword puzzles and watching Jeopardy. She was a wonderful cook and for over 40 years she had fresh baked goods served for lunch at 9am and 3pm as well as a meat and potatoes or hotdish noon meal for the men employed at the farm. Years later, former employees would recall with fond memories a particular dish or baked item that they had while working at Triple “T” Acres. Milly was very proud of her Scandinavian heritage and took joy in serving her family their traditional Christmas lutefisk dinner. She always looked forward to making lefse and flatbread for the holidays while wintering in Arizona.

She enjoyed researching genealogy for both her and Sheldon’s families, especially Kittle Olson, her great grandfather who donated the land for the Village of Wendell. Her love of travel took her to Norway and Sweden four times to search and spend time with relatives that she located due to her extensive genealogy research. She also enjoyed a tour of Europe, a tour of the Holy Land and several cruises. She spent 36 winters in Apache Junction, Arizona loving her second home and the many friends she made throughout the years. For the past 10 months she enjoyed living at Rolling Hills Assisted Living in Barrett. She loved being with old and new friends and playing bingo.

In lieu of flowers, memorials are preferred to Ness Cemetery and United Lutheran Church.

Funeral Service: 1:00 PM Monday, September 2, 2019 at United Lutheran Church, Elbow Lake, with a visitation one hour prior to the service.

To order memorial trees or send flowers to the family in memory of Mildred Tyberg, please visit our flower store.