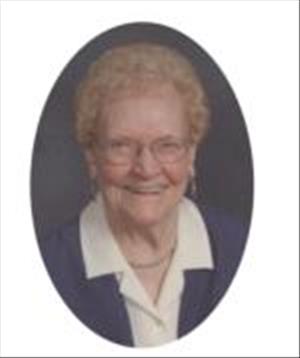 Mildred Stark, age 90, of Morris (formerly of rural Kensington) passed away Saturday, November 27, 2010, at the Courage Cottage in Morris. Funeral services for Mildred Stark will be held at 1:00 pm on Wednesday, December 1, 2010, at Messiah Lutheran Church in Hoffman with Rev. Nathan Thompson officiating. Visitation will be Tuesday from 5-7pm at Messiah Lutheran Church in Hoffman and continue one hour prior to the service. Burial will be in the Aeneas (Ann-e- as) Lutheran Cemetery, rural Kensington.

Mildred was born October 12, 1920, to Erick and Mary (Larson) Person, upstairs in a store in Elbow Lake where they lived. She was baptized shortly thereafter and confirmed on July 22, 1934, at Bethlehem Lutheran Church. Mildred attended and graduated from Elbow Lake Public School, the Minnesota School of Business, and was employed a short time at the Grant County Courthouse, and what is now known as Blue Cross Blue Shield. On April 13, 1941, she married Reuben Stark, and they began their life as a couple on the Stark family farm.

Mildred loved her family: four sons. She was active in the Aeneas Church, serving as organist for several years and later became involved in the activities of Messiah Lutheran Church where she was a member.

As her family grew, her grandchildren and great-grandchildren were so important to her and brought her great joy. Following Reuben's retirement and death, Mildred remained on the farm for a couple of years and then made her home at West Central Homes in Morris.

She was preceded in death by her parents; husband Reuben, and brother Lyle Person.

The family prefers memorials in lieu of flowers.
To order memorial trees or send flowers to the family in memory of Mildred Stark, please visit our flower store.