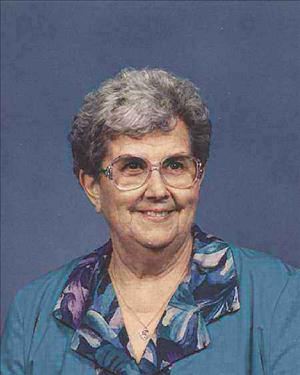 Mildred L. Richards, 95, Norcross, died Tuesday, May 10, 2011, at Lake Region Healthcare Corp. in Fergus Falls. Mildred was born on August 14, 1915, to Charles and Edna (Wilkins) Bacon on the family farm in Logan Township near Herman, Minnesota, where she grew up. She graduated from Herman High School in 1933. On June 25, 1938, Mildred was united in marriage to Ray Richards, and the couple made their home on Ray's home farm near Norcross. Mildred lived in the Norcross community until she moved to the Mill Street Residence and eventually to the Broen Home in Fergus Falls. Mildred was a member of the EUB Church/Faith United Methodist Church in Norcross where she was very active in the ladies group. She belonged to the North Star Homemakers, the Rebekah Lodge, and served as a 4-H leader. She later became a member of the United Methodist Church in Herman. She enjoyed her vegetable garden, raising chickens, crocheting and sewing. Mildred was an excellent cook and enjoyed making bread. She especially enjoyed hosting her family and spending time with her grandchildren and great-grandchildren. Survivors include her son Dale (Olivia) Richards, daughters Fern (Robert) Darkow, Anita (Gerald) Christenson, Shirley (Lowell) Matthews, and Carol (Charles) Piekarski; 14 grandchildren, 31 great-grandchildren, two step-grandsons; and one sister-in-law, Marlos Bacon; and numerous nieces and nephews. She was preceded in death by her parents, her husband Ray, one brother, Walter Bacon, and two sisters, Marge Nelson and Vera Trettin. Funeral Service: 2:00 pm Saturday, May 14, 2011, United Methodist Church, Herman Clergy: Rev. Mickey Olson Burial: Lakeside Cemetery, Herman Visitation: 2 hours prior to the Funeral

two hours prior to the service

To order memorial trees or send flowers to the family in memory of Mildred Richards, please visit our flower store.