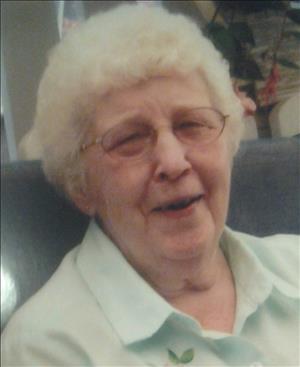 Maymie Alien Nelson died on June 22, 2014 at St. David's Memorial Hospital in Austin, TX, with her daughter Joan by her side. Maymie was born Nov 5th, 1916 in Elbow Lake, MN to Pauline and Max Lohse. She married Arthur Williams and had four children Chuck, Joan, Jerry and Jim. Maymie married Erwin Nelson in 1966. Throughout her life she lived in Elbow Lake, Seattle WA and most recently in Austin TX. She enjoyed gardening, traveling with husband, Erwin to and from Elbow Lake, and continued to read and appreciate the Grant County Herald until her death.

Maymie was preceded in death by her parents, Pauline and Max Lohse; husbands, Arthur Williams (1942), Lars Knutson, and Erwin Nelson (1995); brothers, Maynard, Marvin, Vernon and Jim; sisters, Pearl, Mildred, Doris and Shirley; son, Jim Williams (2002); and son-in-law, Marlin Aarness (2004). She is survived by her daughter, Joan Aarness of Austin, TX; sons, Chuck (Gwen) Williams of Seattle, WA, Jerry (JoAnne) Williams of Loretto, MN; step-children, Nadine, Elida and David; brothers; Roy of Alexander, NC, and Leonard of Huachuca City, AZ; sister, Gladys Nelson of Elbow Lake MN; along with many grandchildren, great-grandchildren and a great-great-grandchild. Maymie Nelson died June 22, 2014 in Austin, TX. A Memorial service will be held 11am Monday, July 14, 2014 at the Erickson Smith Funeral Home of Elbow Lake, MN with a visitation one hour prior to the service. Burial will take place at Lakeside Cemetery in Herman, MN. Erickson-Smith Funeral Home is in charge of arrangements.

Memorial Service will be at 11:00 AM on Monday, July 14 at the Erickson-Smith Funeral Home in Elbow Lake. Burial at Lakeside Cemetery, Herman.

To order memorial trees or send flowers to the family in memory of Maymie Nelson, please visit our flower store.