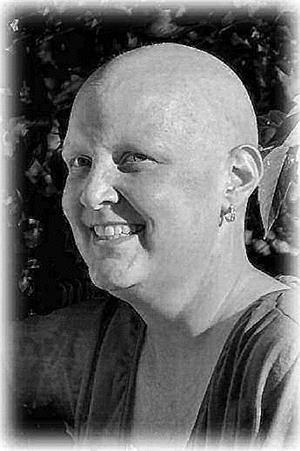 Maryn Shuck Hanson's breast cancer journey ended on Wednesday, February 13, 2013. During the 21 months she battled this disease, Maryn inspired her family and the friends who joined her in her fight. Faith, courage, strength, hope, a genuine smile, and her beautiful bald head were hallmarks of her life. Her greatest joy and her proudest accomplishment were her kids, Tate and Keeley. She was an outside mommy as much as she could be, and when she was inside, she loved reading to and doing puzzles with them. Maryn loved spending time with family and friends. She was a great scrapbooker, quilter, and Target shopper. She loved baking—everything from traditional lefse to the dozens of experimental recipes she tried. She looked forward to the Hanson Annual Camping Weekend. Maryn especially loved the Christmas holiday. Her caramel corn was a favorite of many. A special gift she always loved to share was her gift of singing- at church, in the car, and at home to the kids. Maryn Elizabeth Shuck was born on October 9, 1983, at the Grant County Hospital in Elbow Lake to Ray and Teri (Haley) Shuck. She was the middle child between William and Megan. Maryn attended school at West Central Area in Elbow Lake and Barrett, graduating in 2002. She attended college at the North Dakota State University in Fargo where she was a member of the Ceres Sorority. She graduated in December 2005 with a Bachelor of Science degree in Veterinary Technology. In January 2006, Maryn began her career as a veterinary technician at the Battle Lake Veterinary Clinic until 2009. Maryn and Christopher Hanson were married on March 18, 2006, at United Lutheran Church in Elbow Lake. They made their home near Elbow Lake. Tate Christopher was born March 29, 2008, and Keeley Rose was born April 30, 2010. In 2011, Maryn became Office Administrator at Grace Evangelical Free Church, Elbow Lake, and later accepted the position of treasurer. She loved her job and all the friends she made through her involvement in the church, the General Board, and Women of Grace Board. Maryn is survived by her husband Chris and their children Tate and Keeley; her parents Ray and Teri Shuck; her brother Will Shuck and niece Haley; her sister and brother-in-law Megan and Tony Larson; her grandmother Ann Haley; and aunts, uncles and cousins. Other survivors include her father- and mother-in-law John and Carrie Hanson, sister-in-law Bonita and husband Jon Oestreich and nephew Emmett and brother-in-law Tom Hanson. Funeral Service: 11:00 am Saturday, Feb. 16, 2013, Grace Evangelical Free Church, Elbow Lake Clergy: Rev. Jerry Bauman Visitation: 5-7 pm Friday, Feb. 15, 2013, Grace Evangelical Free Church, Elbow Lake; one hour prior to service at the church Burial: Mound Grove Cemetery, Evansville

One hour prior to the service on Saturday.

Please click here to view the video tribute
To order memorial trees or send flowers to the family in memory of Maryn Hanson, please visit our flower store.