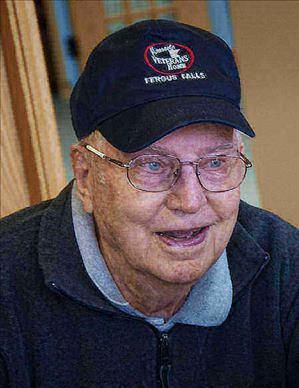 Marvin Helmer Olson, 97, of Elbow Lake passed away on Tuesday, July 30, 2013, at the Minnesota Veterans Home, Alzheimer's Unit, in Fergus Falls. Marvin was born on November 19, 1915, at Nymore, Minnesota. Having moved to the Elbow Lake area, Marvin and his siblings spoke Norwegian within the family until rural school days. In winter, he would skate on the Mustinka River to the country school. He enjoyed farm life with his sister and three brothers. His father taught him carpentry skills and his mom baked him his favorite sugar cookies and lefse. While working on Harry Nelson's barn, he found the love of his life, Harriett. They were married at the farm on September 15, 1940. On September 13, 1943, Marvin was drafted into the U.S. Army, where he served with the 91st Infantry Division from 1943 to 1945 during World War II. While serving a tour of duty in Italy, he received the Bronze Star Medal for his heroic actions. Harriett and their infant daughter, Sandra, lived with her parents for the duration. Upon his return to the United States, Marvin built them a home in Elbow Lake and helped to build many area barns and houses with his father. Two sons, Keith and Loren, were added to the family. When Harriett's father passed away, they traded homes with Harriett's mother and settled in to rural life. Marvin managed his Delaware Township farm and then retired to a farm site near Elbow Lake in later years. In retirement, the couple enjoyed bus trips around the United States, and Marvin loved his woodworking, making jewelry and sewing boxes, quilt racks, birdhouses and more for his friends and family. He was a devoted husband and encouraged Harriett during her struggles with Parkinson's. When Marvin's Alzheimer's, combined with Harriett's health issues, required them to seek more help, they spent a few months at the Hoffman Care Center, then at Loren and Sherry's home, and finally at the Barrett Care Center. Harriett passed in 2011, and Marvin's final years were spent with excellent care at the Veterans Home. Marvin was preceded in death by his wife, Harriett; his parents, Adolph and Hilda Olson; his brothers, Carrol, Lorry and wife Bessie, and Leonard and wife, Ione; his sister, Gladys and husband Heinie Schmall, and brother-in-law, Morey Zuehlsdorff. He is survived by three adult children, eight grandchildren and 17 great-grandchildren: Sandra and John Feneis of Elbow Lake along with their sons, John Paul and Cara Feneis of Seattle, Washington, (children: Lauren, Jack and Bradley) and David and Wendy Feneis, also of Seattle, (children: Owen and Bailey); Keith and Edith Olson of Lac du Bonnet, Manitoba, Canada, along with their children Trevor and Karlene Olson of Rochester, Minnesota, Eric and Katie Olson of Duluth, Minnesota, and Bethany and Patrick Shannon from Toronto, Canada; and Loren and Sherry Olson of Elbow Lake along with their children, Chad and Adrienne Olson of Mahomet, Illinois, (children: Lauren and Avery), Andrew and Dacia Olson of Champlin, Minnesota, (children: Abigail, Lydia, Micah and Eli), and Nic and Megan Olson of Andover, Minnesota, (children: Hugo, Maria, Serena, Aliah, Corinn and Noah). Other survivors include his two sisters-in-law: Shirley (Carrol) Olson of Elbow Lake and Dorothy Zuehlsdorff of Moorhead, Minnesota. Funeral: 11:00 am Thursday, August 8, 2013, United Lutheran Church, Elbow Lake Clergy: Pastor Chris Eldredge Cemetery: Ness Cemetery, Elbow Lake Visitation: 5-7 pm Wednesday, August 7, 2013, Erickson-Smith Funeral Home, Elbow Lake; 1 hour prior to service at church

Resumes at the church one hour prior to the service.

To order memorial trees or send flowers to the family in memory of Marvin Olson, please visit our flower store.