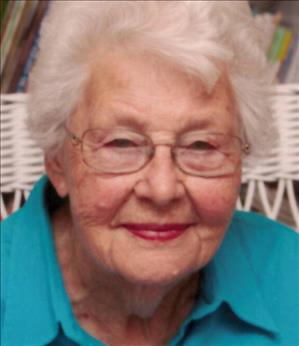 Marrida A. Bjerke Myron was born September 23, 1917, in Kensington, Minnesota to J.A. and J. Bertina (Benson) Bjerke. She died at the age of 99 on January 27, 2017, in Elbow Lake, Minnesota on what would have been her husband Harold's birthday. Marrida was baptized on November 11, 1917, and was a lifelong Lutheran. She was Salutatorian at her May 30, 1935 graduation from Barrett High School. She attended Moorhead State Teachers College where she received her Teaching Certificate.

Prior to her marriage, Marrida taught at rural schools in Traverse County, Blue Earth (twice: they made her an offer "I couldn't refuse"), Roseville Township and Wendell. Marrida was planning to accept a teaching contract in Idaho when a handsome young man, Harold Myron, intervened in her plans. They were married on June 10, 1945. Marrida continued to teach periodically during their marriage, at Aastad District 64, Riverside School and the Barrett Schools, and was teacher and principal at the Donnelly School. Marrida and Harold farmed until they retired from farming in 1973. They were married for fifty-five years until Harold's death in 2001.

Marrida and Harold travelled extensively, including Mexico, Germany, England, Canary Islands, Morocco and other areas of Africa, and several trips to Norway. She traveled to Europe for the last time when she was 92, with her daughter Christine. Marrida wintered in Texas until she was 96.

Marrida worked as a guardian ad litem from 1984-1992, and continued her involvement in many church and community volunteer activities and projects, including the ELCA Constitutional Convention, other church conventions, the Rural Women's Forum, Ladies Aid and Circles, Sunday School, the Rural Ministry Committee, Grant County Mental Health Committee, the Task Force on World Hunger, the Center For Global Service and Education (where she travelled to Nicaragua and got up close and personal with the Sandinistas), in Senior Federation, the Dalton, Ashby, Wendell and Elbow Lake Senior Clubs, and of course a volunteer reader for the first graders. Harold and Marrida raised five children, Christine, Theodore, Kathryn, Kurt and Mark. Marrida blessed them by giving them love, support, encouragement, yummy cinnamon rolls, Friday poetry nights and the freedom to pursue their own dreams.

Visitation will be one hour prior to services at the church. Burial will be in the church cemetery.

The Erickson-Smith Funeral Home of Elbow Lake is in charge of arrangements for Marrida Bjerke Myron.

To order memorial trees or send flowers to the family in memory of Marrida Myron, please visit our flower store.