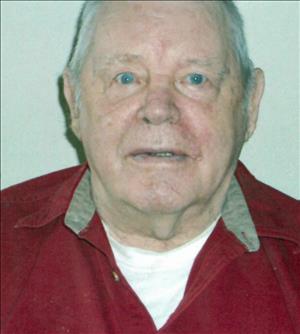 Marlyn Dean Olson was born January 29, 1937 in Alexandria, MN to Selmer (Sam) and Mae (Lindemyer) Olson of rural Erdahl, MN. He attended a one room school house by Erdahl and later Evansville High School until about the 10th grade. He married Helene Fjeld in Minneapolis, and this union of 56 years lasted until his death. One child resulted from this union, Dean. They lived in Minneapolis and he worked on building water towers until the accidental death of his father in 1962. The family moved back to Erdahl to run the family farm until he retired in 1997, due to health reasons. During his retirement he made it a point to go into town every morning to get a cappuccino. He enjoyed farming and raising cattle. Marlyn enjoyed tinkering and fixing things and appreciated old cars and John Deere tractors. He also liked snowmobiling, four wheeling, and spending time with his grandkids, Nikki and Jeremy. Marlyn passed away in his sleep at the Evansville Care Campus on December 17, 2014 at the age of seventy-seven years. He is survived by his wife, Helene Olson of Erdahl; one son, Dean (Mona) Olson of Erdahl; 2 grandchildren, Nicole Olson of Elbow Lake, Jeremy(Sylvia) Olson of Erdahl; 3 great-grandchildren Kaylee, Jessie and Parker, and 4 extended grandchildren and their families, Mike (Tara) Mohrmann of Gilman, MN, Jason Mohrmann Rice, MN, Janel (Duane) Hamilton of Evansville, MN, Tessa (Jude) Hansen of Elbow Lake, MN; one sister, Dee Dee(Bennie) Olson of Morris, MN

Marlyn is preceded in death by his parents, Selmer and Mae; parents in law, Melvin & Helen and, one brother, Sherman. Funeral: 2:00 PM, Saturday, December 20, 2014 at the Erickson-Smith Funeral Home of Elbow Lake with visitation one hour prior. Officiating: Pastor Gabriel Norton Arrangements: Erickson-Smith Funeral Home of Elbow Lake Condolences: EricksonSmithFH.com

To order memorial trees or send flowers to the family in memory of Marlyn Olson, please visit our flower store.