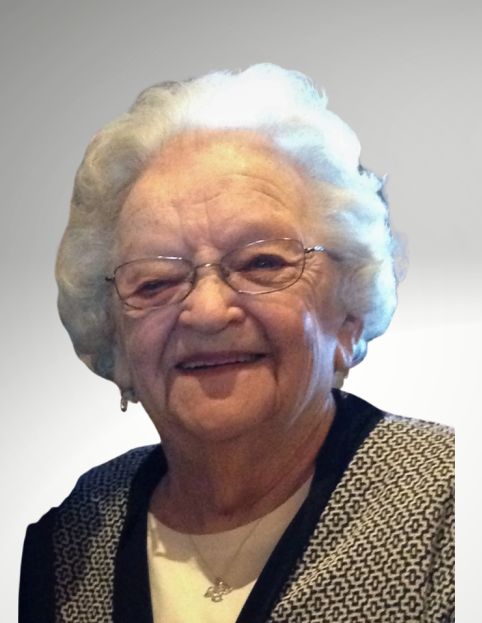 Marjorie (Marge) Lucille Borgos, age 95, passed away peacefully at her apartment at the Barrett Assisted Living Center just one day shy of her 96th birthday. She was born April 3, 1925 in Henning, MN to Clarence and Viola (Foggy) Bond the 6th of 9 children.  She grew up in Henning MN and graduated from Henning High School.  Marge married Harold Edwin Borgos on June 20, 1948 and they raised their five children in Elbow Lake MN.  After Harold’s passing in 1993, Marge lived independently in the family home until age 90 when she downsized to apartment living.  The past two years she has resided at Barrett Assisted Living Center surrounded by wonderful neighbors and staff. Even during COVID, they managed to socially distance and play bingo in the hallway from their apartment doorways.

Marge loved crocheting, Bingo, word puzzles, anything with an angel and her 9 wonderful grandchildren and 4 great grandchildren (one who shared Marge’s birthday!).  She never missed an opportunity to grace someone with her hand crocheted tablecloths, doilies, bookmarks and dishcloths. She loved nothing more than having someone say how much they loved her handiwork.

She was a busy homemaker raising their 5 active children and as well as working at the Elbow Lake Bakery (that she claimed had the best dinner rolls in MN!)

For many years Marge volunteered at the United Lutheran Church and the Elbow Lake Senior Citizen Center. She was known for never missing her assigned time and was honored with a volunteer award for her dedication. Marge was a 50+ year member of American Legion Auxiliary Unit 321 of Elbow Lake.  She was an amiable soul who was always willing to put others first, likely learned from growing up during the depression with 8 brothers and sisters.  Even in her last month, she continued her lifelong tradition of sending handwritten birthday cards- that always arrived on time!

She was proceeded in death by her parents Clarence and Viola Bond, her husband Harold, brothers Milo, Raymond, Warren, James and Virgil and sisters Bertha and Gertrude.

Visitation: One hour prior to the service.

In lieu of flowers, donations preferred to the United Lutheran Church of Elbow Lake.

To order memorial trees or send flowers to the family in memory of Marjorie "Marge" Borgos, please visit our flower store.