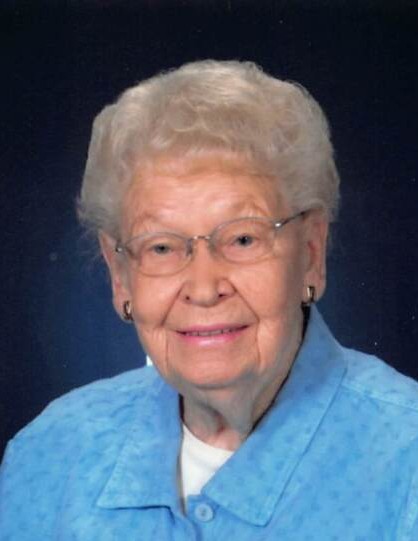 Marian (Halvorson) Swenson passed away peacefully on January 19, 2021 at the Prairie Ridge Hospital in Elbow Lake, surrounded by her family.

She was born on June 13, 1922, to Mabel (Haugen) and Albert O. Halvorson at their apartment on main street in Elbow Lake, Minnesota.  She was what you would call an “original;” born here and never left.

Marian was a woman of strong faith.  A life time member of United Lutheran, she was baptized, confirmed and married at St. John’s Lutheran Church which later merged with several congregations to form United Lutheran Church.  Throughout the years she was an integral participant in church activities, including ULCW and Women’s Circle.

Marian graduated from Elbow Lake High School in 1940 as her class valedictorian. The two remaining classmates planned to celebrate their 80th ELHS Class Reunion this past summer, however they were forced to cancel due to Covid.  She went on to Concordia College in Moorhead for two years on a scholarship and then transferred to Iowa State College hoping to become a dietician.  During her 1st semester at Iowa State her mother was diagnosed with terminal cancer.  Her disease had progressed so far that no treatment could arrest its course.  At Christmas break, Marian came by Rochester to take her mother home and was told she had at the most six months to live.  Marian cared for her in their home until her death on May 21st, 1943 at 46 years of age.  She stayed on and cared for her father and her younger siblings and was offered a job at the First National Bank in Elbow Lake as a steno-teller where she worked for three years before she was married and two years after.  She met her husband, Bob Swenson, at St. John’s church choir practice and they were married on October 11, 1947.  They settled in and raised their family in the home of her parents.  After their first child was born, Marian became a “stay-at-home” mom, a job from which she never retired.  While Bob and Marian never lived in the country, they farmed together in Grant County for over 65 years while raising their family of four children.  They celebrated 70 years of marriage before Bob passed away in 2017.

Marian was a member of Homemaker’s Club, active in the Hospital Auxiliary and a member of the American Legion Auxiliary Unit in Elbow Lake since 1945 where she sang & competed with the Ladies Sextet.  She had many interests and enjoyed spending time with family and friends, traveling with her husband Bob both domestically and to foreign countries, including three trips to Norway.  And until just recently they spent winter months in Arizona.  Marian took great pleasure in handwork, such as embroidery and sewing.  She loved working on all kinds of puzzles and seeing them come together.  She enjoyed gatherings with family and friends, old time music, dancing with Bob, playing bridge, reading, attending auctions and collecting things, including Hummel figurines and coins.  Marian loved to cook and bake, spending many hours reading and reviewing recipes.  Numerous cookbooks and treasured recipe cards speckled her kitchen cupboards.  She was always willing to share a recipe and would gladly pass down her legacy of cooking, even giving hand-written cookbooks to her grandchildren.  Her family always looked forward to when she served the family favorites, especially her beef and pork roast dinners.  Marian was an expert canner.  She was known for her dill pickles and sweet pickles - from the homegrown dill to the perfect sized cucumbers, her pickles were sought at every family occasion.  She also canned peaches and cherries and every August would engage in a marathon session of freezing sweet corn.  Marian’s heritage was very dear to her, cooking Norwegian foods such as lefse, sandbakkels and rommegrot were things she enjoyed.  She carried on family traditions at Christmas with decorations and baking Norwegian goodies, which were gobbled up as quickly as they came out of the oven.

Marian’s family was of utmost importance to her.  She provided her family with a wonderful home and through her presence showered her family with unconditional love.  Through her strength of character, Marian modeled patience, generosity, kindness and selfless caring in her interactions with others.  She served as her family’s touchstone.  Marian was blessed with six grandchildren, all of whom she was so very proud – they meant the world to her.  Each shared a special connection with their grandmother and knew how she loved them so. They will remember their grandma for her welcoming hospitality, delicious baking, home-cooked meals and her Norwegian holiday traditions.

A Celebration of Life will be held at 2:00PM on Wednesday, July 14, 2021 at United Lutheran Church, Elbow Lake with Visitation one hour prior to the service.

To order memorial trees or send flowers to the family in memory of Marian Swenson, please visit our flower store.