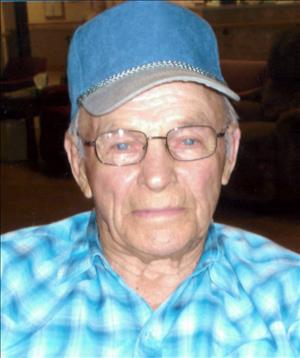 Marcus Alvstad, 92 of Elbow Lake, Minnesota died Saturday, August 13, 2016, at the Evansville Care Center, with Ardis his loving wife of fifty-two years at his side. Marcus Donald Alvstad was born on May 12, 1924, at home in Pelican Lake Township, Grant County, Minnesota the son of Erick and Mina (Rustad) Alvstad. He was baptized and confirmed in the Pelican Lake Lutheran Church in Ashby, which is now Peace Lutheran Church where he is a member. When he was twelve years old he moved with his parents and siblings to their farm in Erdahl Township, where they had just completed building a house and barn. On October 26, 1963, he married Ardis Wik at the Calvary Covenant Church in Evansville, Minnesota. Marcus bought his parents farm in 1962, where he farmed until he retired in 1988, and then enjoyed doing farm work with his nephew for several years. He and Ardis lived on the farm until they moved to Elbow Lake in September of 2006. He enjoyed traveling and visiting. He is survived by his wife, Ardis; two sisters, Mae Wick and Edna Strom both of Evansville; three sisters-in-law, Vernie Alvstad of Alexandria, Marjorie Berry of Evansville and Joyce (Roger) Langlie of Ashby; numerous nieces and nephews and grand, great-grand and great-great grand -nieces and nephews; and by special cousins, Betty Rustad, Paul Rustad and Roger (Virginia) Rustad all of Fergus Falls. Marcus was preceded in death by his parents; two brothers, Carl (Amelia) Alvstad and Lyle Alvstad; three sisters, Grace (Harvey) Waugh, Ellen (Harold) Friske and Lillian (Baldwin) Svendsen; sister-in-law and brother-in-law Carol and Howard Buchholz; three brothers-in-law, Maurice Strom, Albert Wickand James Berry; and by several nieces and nephews. In lieu of flowers memorials are preferred to Peace Lutheran Church of Ashby or Douglas County Hospice of Alexandria. Memorial Service: 11 AM Thursday, August 18, 2016, at Peace Lutheran Church in Ashby, with visitation one hour prior to services Clergy: Reverend Tom Olson Interment: Erdahl Lutheran Cemetery Arrangements by Erickson-Smith Funeral Home of Elbow Lake Online Guestbook: EricksonSmithFH.com

11:00 AM
Peace Lutheran Church of Ashby

To order memorial trees or send flowers to the family in memory of Marcus Alvstad, please visit our flower store.