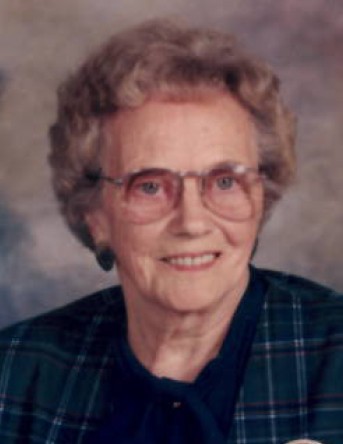 Mae Eleanore Wick, age 102, formerly of Elbow Lake, passed away Tuesday, August 29, 2017, at the Evansville Care Center of natural causes. She was surrounded by family.

Mae was born May 11, 1915 in Pelican Lake Township, Grant County, Minnesota. She was one of eight children born to Erick Alvstad and Mina (Rustad) Alvstad.  While she attended District #9 Pelican Lake school she helped out on the family farm in Ashby.  Some of her favorite past times were dancing, crocheting and painting. She appreciated receiving foot massages, getting her nails painted and having her hair styled. Mae lived a full adventurous life.

In 1937, Mae moved to the Twin Cities to become employed were she later met Lawrence William Barquist and married him on December 3, 1938.  They were blessed with one daughter Cheryl Ann Barquist (Larson) on August 13, 1950. They lived in Richfield for 25 years were Mae became employed by Fairview Southdale Hospital for 12 years as a Cart Aide were she later retired.  On June 26, 1976 her husband Lawrence of 37 years passed away and she moved back to the Elbow Lake area.  Mae went on to marry Albert Edwin Wick from Elbow Lake on June 26, 1980.  Mae enjoyed being involved in the Senior Notes group where they were members of their local church. She also liked volunteering at her local Senior Center.  After Albert’s passing on December 27, 1990, Mae involved her time between gardening and bingo with family and friends.

In lieu of flowers memorials are preferred to United Lutheran Church of Elbow Lake or Douglas County Hospice of Alexandria.

Memorial Service:  11 AM Saturday, September 30, 2017, at United Lutheran Church in Elbow Lake, with visitation one hour prior to services.

To order memorial trees or send flowers to the family in memory of Mae Wick, please visit our flower store.